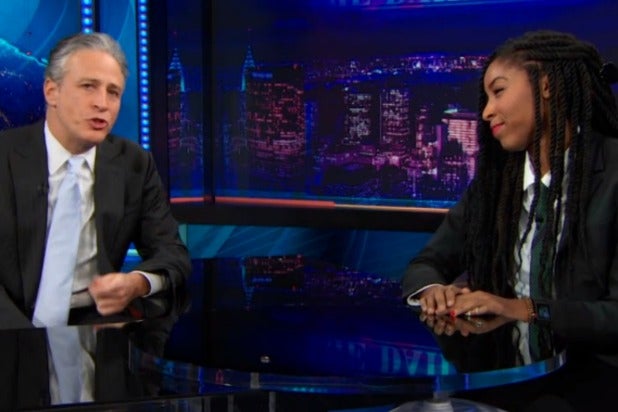 Jon Stewart re-enacted the shooting of Florida teen Jordan Davis on Tuesday’s “Daily Show” — and correspondent Jessica Williams gave other African-American teenagers tips on how they could avoid being shot.

Suggestion No. 1: Stay in school — an actual school building. Or stay home. Go outside, Williams said, and you might accidentally scare a white person.

A Florida jury convicted Michael Dunn of attempted second-degree murder for opening fire on three teens who were in the same SUV as Davis, but deadlocked on a murder charge in Davis’ death. Dunn shot Davis after demanding he turn down his music.

After acting out the moments leading up to the shooting, Stewart noted that Dunn shot at the SUV even as it sped off.

“How was Dunn standing his ground?” Stewart asked. “It sounds like he was actually gaining ground.”

Williams then called the verdict “the cherry on top of the shit sundae that is Black History Month” — pointing out that February is the only month that contains the letters F and U. And she offered her survival tips. Among them: Don’t hang out in groups.

“Jon, four black guys could be taking a Calculus test together. And to jumpy white folks, it would still look like a scene from ‘The Wire,'” she said.