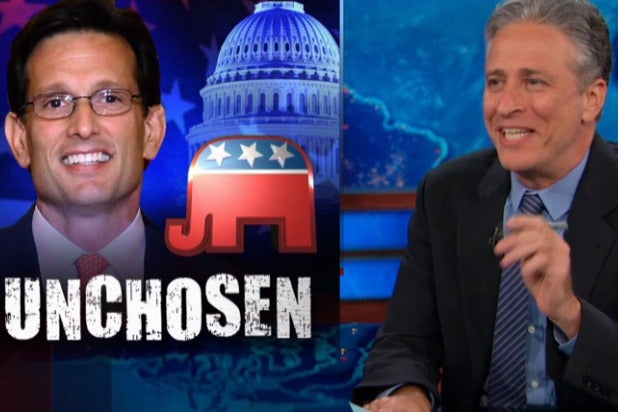 Jon Stewart welcome Congress’ new McDreamy, Tea Party candidate David Brat — but thinks he may be overdoing it with thanking Jesus for his win.

“Very hard to conduct your campaign when you’ve got the meat sweats,” Stewart said on Wednesday’s “Daily Show.”

He noted that Brat, a college professor, had also earned the coveted chili pepper — an indication of hotness — on RateMyProfessors.com.

But Stewart was a little taken aback by Brat pulling out a piece of paper during his acceptance speech with Luke 18:27 printed on it: “Jesus replied, ‘What is impossible with man is possible with God.'” Brat also repeatedly called his victory a miracle from God.

We get it, you beat a Jewish guy,” Stewart said. “We get it. Fine, we’re not as chosen as we thought we were. Okay?”

Kidding aside, some pundits have speculated that Cantor — the only Jewish Republican in Congress — was hurt by redistricting that made his conservative district more rural, and perhaps more Christian. But others have noted that Cantor was re-elected in the district several times.