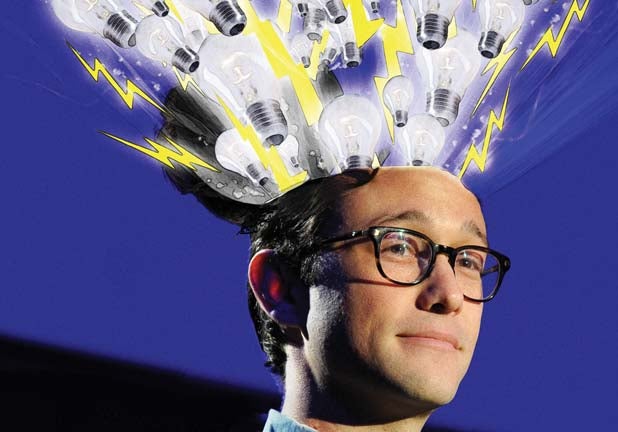 This story originally appeared in EmmyWrap: Secrets of the Comedy Ingenues

Joseph Gordon-Levitt‘s multi-faceted hitRECord project started as an inspirational slogan, gave birth to a website and a number of short films and videos, and has now turned into “hitRECord on TV,” a freewheeling show that relies on a blend of music, videos, short films, dances and all-around crowd-sourced creativity. The Pivot show is an unusual contender in the Emmy variety-show categories, which are usually dominated by the likes of “The Daily Show,” “The Colbert Report,” “The Late Show With David Letterman” and “Saturday Night Live.”

A typical “hitRECord” segment will start with a request made by Gordon-Levitt on the website: “Tell us about your first time doing anything,” “Play this piece of music on any instrument,” etc. Some participants send in text, video and audio, others do remixes, and Gordon-Levitt combines the best into a short piece that airs on the show, each episode of which is organized around a theme.

The 33-year-old actor-director-producer spoke to TheWrap as he prepped his show’s second season and prepared to play tightrope walker Philippe Petit in Robert Zemeckis‘ “To Walk the Clouds.”

In the early stages, when the idea of hitRECord came to you, was TV a part of it?
It depends on what you mean by the early stages. It began as a personal philosophy and a message to myself, with the round red “RECORD” button being a symbol of self-started creativity. And from there, it was just a hobby that my bother and I did for years.

Then in 2010 we launched it as a professional production company, a collaborative process on the website. At that point TV was the pipe dream, the pie-in-the sky idea. And it has been a really gradual and organic evolution. It doesn’t feel like a calculation, or a product of committees and market research. It evolved naturally out of feedback between me and a whole community of people gathering around this website. And as it grew, the art that we were making kept growing in scale and in quality, until after a number of years a TV show felt  possible. It wouldn’t have felt that way at first — we wouldn’t have been able to generate enough quality material.

Also read: Joseph Gordon-Levitt is the Benevolent Dictator of HITRECORD

Any specific examples of quality that surprised you?
A good example is the first short film in our first episode. The theme was the No. 1, and I put out a request for people to tell stories about their first time doing something. We got this true-life story written by a young woman who had an eye condition and had never seen the stars until she was 16, when her father bought her a pair of night-vision goggles.

If I had tasked a room full of Hollywood writers to write a film about “the first time,” they never would have come up with that. You get these out-of- the-box ideas that you’d never get in a more traditional setting.

But you have one old-school touch: you actually pay for content.
Well, again it’s been an evolution. The business model that we use for our TV show is very similar to the one we started using in 2010: Any time the production turns a profit, we split the profit in half, and half goes to the people who contributed.

The difference is that in TV you don’t go into profit for years, so we had to alter our idea to set aside a portion of the budget that would be earmarked for artists. It’s now $50,000 per episode, and all the different artists get a piece of that 50 grand.

Back in 2010, I think we paid a total of 40 grand to the artists whose work was featured. In 2013 it was 737 grand. If we had to pay 737 grand without having built up to it on the website, we would have lost our minds trying to figure out how to distribute it fairly.

Now that you’re prepping Season 2, have you found increased participation from your audience?
Oh, absolutely. When we were creating Season 1 last year, we put out the request for ideas for show themes. And over the course of a couple of months, we got about 1,500 contributions from different people suggesting themes. This year, when we made the same request, we got that amount within 24 hours. And it makes perfect sense, because last year we were saying we were a TV show, but nobody has seen it. Nobody knew if it was going to be any good, and nobody could know where their contribution was going. Now that people have seen the show, it makes so much more sense.

Is it odd to be in the same Emmy variety category as David Letterman, Jon Stewart, Stephen Colbert and “Saturday Night Live?”
Well, our show’s different from those shows, but I think our show is in a way truer to the category. There’s a sincere variety of things in every episode, whether it’s comedy or drama or cartoons or music. I was certainly inspired by some of the old-fashioned variety shows, the Judy Garland kind of variety show, or “The Muppet Show.” It’s sort of an old- fashioned variety show, in its way.

For me, that’s more the natural way of things. If you go back to the days of people gathering around campfires and telling stories and telling the news of the day, it didn’t used to be one person talking and everybody else listening — it was everyone participating.

[Laughs] I don’t have any scientific evidence for this. This is my intuition. It’s human nature: You put a bunch of people around a fire, everyone’s going to chime in. That’s the natural way of things, and that’s the direction that media is going on. Something that’s less of a monologue and more of a dialogue. “hitRECord” is just one way of turning that evolution into something entertaining.

Your brother, who was around when you first came up with the hitRECord concept, died in 2010. Did he see what was happening with the project?
He saw it begin. He was around as it turned into a professional production company, and he was around for our first several productions. And I think he would certainly be delighted, if not astonished, at how far we’ve come.