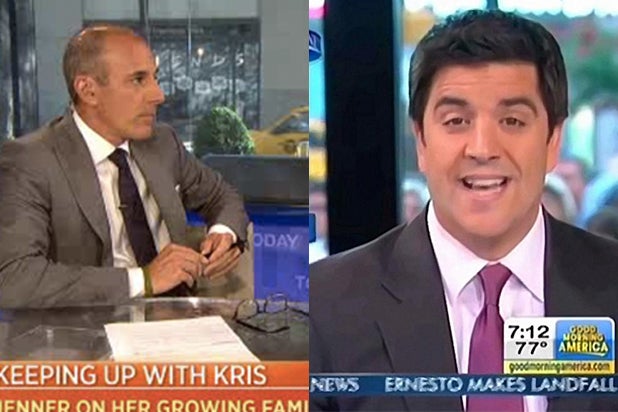 Josh Elliott’s first duty for NBC Sports — where he will do a mixture of hosting, interviewing and reporting — will be covering the Kentucky Derby on May 3.

“I feel like the luckiest man in television today,” Elliott said of his new job Wednesday during an NBC Sports conference call, where he was joined by Chairman Mark Lazarus. The former and once-again sports reporter compared his spot in the talented group he is joining with “the last man on the bench of the ‘Showtime’ Lakers.”

Elliott also addressed the rampant speculation that he is really being brought aboard the NBCUniversal property to eventually join the No. 2 morning show, “Today,” perhaps even to replace Matt Lauer.

“No news role has been discussed with me,” he said. “I hope Matt Lauer is here when I step away from this gig 30 years down the road.”

Lauer’s contract expires at the end of 2015, though contracts such as his often have one-year out clauses, which would bring it to the end of this year. Elliott’s former ABC News contract had a six-month non-compete clause, which means that the former ESPN personality could not be on any NBC News properties, including “Today,” until late fall.

On leaving the No. 1 morning show, ABC’s “Good Morning America,” Elliott said: “The decision to come here was tough to make. It was bittersweet, it was made with a degree of melancholy and a heavy heart.”

“I am and shall remain eternally thankful to all the people who have helped me along the way, none more so than Ben Sherwood, who gave me the opportunity of a lifetime,” the longtime Disney/ABC employee added. “My love for them, despite what you might read in some corners, is profound and ironclad.”

Elliott also addressed the contract negotiations with ABC, calling them “not acrimonious,” and a reported rift with boss Sherwood and “GMA” colleagues a “non-story,” “laughable” and “sad.” Still, reading and hearing about the reports has been “painful” and “incredibly uncomfortable,” Elliott added.

“I think Michael would improve any team that he joins,” Elliott said.

He had even more glowing words for his actual “GMA” replacement, the promoted Amy Robach. Elliott insisted that Robach, one of his “favorite people” is “so good at so many different things” and a “phenomenal journalist.”

Elliott also called her “half pirate, half trucker” — but in a good way.