Ariana DeBose, who last month became the first openly LGBTQ actress to win the Academy Award for her supporting role in Steven Spielberg’s “West Side Story,” will present the honor at the 33rd annual GLAAD Media Awards at the Hilton Midtown New York on May 6.

Light, who first rose to fame on the 1980s sitcom “Who’s the Boss?” has become a prominent advocate for LGBTQ causes since starring in the acclaimed 1989 TV movie “The Ryan White Story,” based on the true story of a teenager who was expelled from his school after contracting HIV. The Tony and Emmy winner most recently starred in the Starz series “Shining Vale,” HBO Max’s “Julia” and the upcoming Searchlight film “The Menu.” 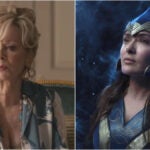 Since launching in 1990, the GLAAD Media Awards have honored media for fair, accurate and inclusive representations of LGBTQ people and issues.