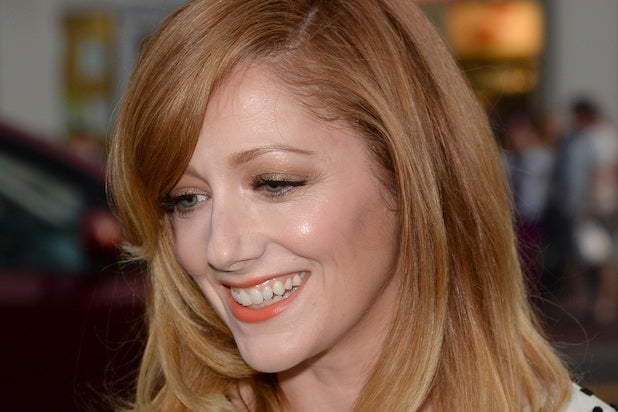 Judy Greer‘s book “I Don’t Know What You Know Me From” is titled after the idea that people who see the hard-working character actress on the street don’t know why they recognize her. But it comes out at a time when her status as an I-know-you-but-I-don’t-know-why celebrity may be in jeopardy.

With “Dawn of the Planet of the Apes” due in theaters in July and “Jurassic World” now filming, she’s in a couple of no-doubt blockbusters to go along with the upcoming FX series “Married,” the recently revived “Arrested Development,” her web series “Reluctantly Healthy,” her commercials, and her voiceover work in “Archer” and “Robot Chicken,” among other things. “I think it’s the busiest time in my whole entire life,” she told TheWrap recently.

Greer, who became almost famous playing the best friend in a string of romantic comedies that include “13 Going on 30,” “The Wedding Planner” and “27 Dresses,” among others, sums up her life and career with wit and style in her memoir. She has a knack for fashioning prose that’s conversational, funny and adept at conveying the twists and turns of an unusual life and career that has taken her from a childhood in Detroit to a stark-naked interlude in a ladies’ room stall at the 2012 Academy Awards. (The Oscar chapter alone is priceless.)

“You’ve heard the phrase ‘There are no small roles, just small actors?'” she writes in the book’s introduction. “Well, I kind of disagree. There are small roles, but when you get a lot of them in a row, you can become a pretty successful actress, and that’s what I’ve done.”

You’re playing an ape in “Dawn of the Planet of the Apes.” Did you have to go to Andy Serkis performance-capture school?
Basically, yes. Andy wasn’t there when I got to New Orleans a couple of weeks early, because he was working already. But Terry Notary, who is sort of like the ape guru, taught me how to be an ape. I’m not a stunt person, I’m not a super-athlete like these other guys they had. They’re all parkour people, Cirque du Soleil performers, amazing athletes and amazing performers. And that’s just not me. But he trained me to be the kind of ape that I could be.

Also read: James Franco Didn’t Know He Has a Cameo in ‘Dawn of the Planet of the Apes’

Did you feel like you were getting to act, or was it very technical?
The first day, it was very technical. It was one of my most nervous first days of work ever. I felt like everyone was watching me to see if I could be an ape. I was like, “Oh god, people are gonna make fun of me, they’re gonna think I’m terrible, they’re gonna wish they had a stunt person …”

But once you jump in the cold pool you warm up, and that’s kind of what happened to me. Once I got my sea legs, or my ape legs if you will, I felt great. And I felt like I was really acting. I had a couple of great scenes that I’m really proud of, whether it’s motion capture or if I was in hair and makeup as a human. I got notes that I was able to take and alter my performance, and that’s what acting is: making choices, being directed and having a real emotional experience. All that stuff happened.

When do you shoot the new “Jurassic Park” movie?
Not ’til June. They’re in Hawaii right now. I think I meet up with them in New Orleans. But I don’t have a ton of details about that. It changes a lot and they don’t tell me anything because it’s so top secret.

I can tell you that I’m not playing a dinosaur.

I didn’t figure you were.
I’ve been asked that question a lot lately, since I just played an ape.

A couple of years ago, you said there was a point when you told your agents, “I don’t want to do best-friend roles anymore. Let’s look for something different.” From “The Descendants” to “Planet of the Apes” and “Jurassic World,” that strategy seems to have worked.
Yeah, it really has. Somehow I put it out there and it came right back to me. How rare is that? I’m not saying that if another great best-friend role came along I wouldn’t want to take it. But I’m thrilled that I’ve gotten to venture out of that.

Do you still get scripts for best-friend roles?
They haven’t come in as much, actually. But you know, they’re just not making a ton of romantic comedies right now. It’s a real bummer.

The first time we spoke, you said you once wrote a romantic comedy script, and it was harder than you thought. How about writing a book? Was that harder than you thought it would be?
I found the structure of writing a screenplay harder than the structure of writing an essay. But it was definitely challenging to force myself to sit and write. I’m not used to having to force myself to work. I get an acting job, and they’re like, “OK, be there at 6 a.m.” And I go and sit there, and people write things for me to say, and do my hair and makeup and put me in clothes, and I do what they tell me to do. This was totally different.

I would be like, oh, I don’t have any plans tomorrow, so I’m gonna write all day! And then a girlfriend would say, “Let’s have lunch.” Yeah! And oh, I should work out. And I need to run to the store really quick, and return this thing and buy this other thing … It was like that all day. So that was the part where I had to say, no more lunches with friends, no plans during the day. That’s it.

Did you every feel any pressure to tell more stories about your co-stars?
No one ever pushed me to say anything bad or negative, and I really appreciated that. And none of that stuff was in my proposal. I never went in there saying, “I’m gonna say what Ashton Kutcher‘s really like,” because I did. [The book tells how Kutcher bought Greer’s father a Harley.] I don’t really have bad things to say, and they never pushed me toward it which made me really happy.

The only thing that was different from my proposal was that when I wrote the proposal, I remembered having all these journals when I was a kid. I had over 40 journals, and I thought I’d go back and look through them all and I’d have a few chapters. But they were all so terrible that instead of having a lot of chapters taken straight from my journals, it turned into one chapter about how terrible my diaries were and how I haven’t changed that much since I was a kid. That was the only change: “Oh, crap, my journals suck.”

The book is so self-deprecating that nobody in it should worry – you’re the one who comes off worst in all your stories.
Yeah, you’re probably right. [Laughs]

But didn’t you ever feel like saying, “Hey, I shouldn’t be so down on myself. I’m pretty awesome”?
I feel like I have a healthy self-esteem. I know I’m self-deprecating, but I don’t necessarily know that it’s a bad thing. I mean, I’m definitely happy, and I’m definitely happy with my work. But yeah, that’s just not who I am. It could just be the Midwesterner in me – we’re just not like that.

You know, when I’m out with other actors and they’re like, “Oh, did you see my work in such-and-such movie, it was really great,” I’m always shocked. Because I always feel like I can do better.

The chapter about your trip to the Oscars is very funny as it details a string of mishaps and humiliations. I remember talking to you at the Fox Searchlight party after the Oscars, and …
And you had no idea?

Exactly. I knew you were disappointed that “The Descendants” didn’t win, but I had no idea you’d just had the most miserable Oscar experience ever.
Well, I would say the first hour was the most miserable Oscar experience ever. Once I got past finding out that my lingerie straps were showing, I was like, “OK, settle down, Greer. You may never come back to the Oscars again, so let’s get through this.” I couldn’t believe it just wasn’t a perfect night, but you know what? It ended up for me being a really great moment just being at those Oscars. I was so devastated that we lost, and I was so shocked and devastated that George [Clooney] and Alexander [Payne] lost, but it was still the Oscars, and that was pretty awesome.

Speaking of competition – on Twitter, you put the hashtag #buymybookplease on a lot of your tweets after the book came out. So are you watching the sales figures?
No, that’ll just make me crazy. I’m really working hard at doing the kind of press for my book that I feel comfortable with, but at the same time I’m acting in this TV series, and I gotta keep my head in the game. If I was obsessing over the book, I don’t know how well I’d do with acting.

I really do want people to buy my book. And I really do believe in please and thank you.