Julian Assange probably won’t like the movie that Bill Condon has made about himself and his website WikiLeaks, but the question that hung in the air after Thursday’s opening-night gala for “The Fifth Estate” at the 38th Toronto International Film Festival was something different: What would Roger Ebert have thought?

Assange and Ebert were somehow linked during the festivities at Roy Thomson Hall, which kicked off with a film tribute to the late critic before the world premiere of Condon’s movie. The short film, directed by Barry Avrich, found assorted Toronto officials talking about Ebert, a supporter of and regular visitor to TIFF since he was coaxed to attend its second year in 1976.

“Roger Ebert … was one of the key people who helped put our festival on the map,” said festival director and CEO Piers Handling, who along with a bevy of TIFF dignitaries presented Ebert’s wife, Chaz Ebert, with a replica plaque like the one that was placed on a chair at the TIFF Bell Lightbox’s main theater in tribute to Ebert. 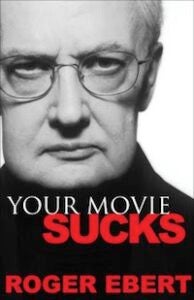 In her thank-yous, Chaz Ebert referred to her husband as “a humanitarian,” and then laughed. “Yeah, he also wrote the book ‘Your Movie Sucks,’ but only because he loved movies so much he wanted you to see the really good ones.”

And when Condon took the stage a few minutes later to introduce “The Fifth Estate,” he found an explicit and amusing tie between the two men. “I had blocked it out until Chaz mentioned it,” he said, “but I am actually in ‘Your Movie Sucks.'”

(An online perusal of the book’s index shows that none of Condon’s movies get actual chapters in the book, so the writer-director must have been mentioned in passing.)

Chances are that Ebert would not have thought that “The Fifth Estate” sucks. A handsomely mounted, impeccably cast and well-paced drama that focuses on WikiLeaks’ release of mountains of classified information about the war in Afghanistan, it marks a welcome return to adult moviemaking for Condon, whose last two films were installments in “The Twilight Saga.”

With a flash to his filmmaking designed to capture the frenetic pace of today’s information avalanche and some eye-catching fantasy scenes that represent a WikiLeaks office of the imagination, the movie occasionally tries a little too hard to whip up the drama; when the governments of several countries and the boards of a few multinational corporations want to take you down for revealing their dirty laundry, the stakes are high enough to begin with — as the real Assange, stuck in the Ecuadorian embassy in London, could testify.

Condon called it the “political film” he had wanted to make for a long time, though in his introductory remarks he insisted that it did not seek to take a side. “We’re trying not to give answers but to raise questions,” he said. “We want to present the issue in all its complexity.” 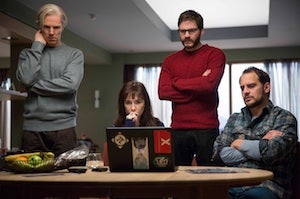 The film presents Assange as both a crusader for transparency, truth and justice who revolutionized the way journalism is practiced, and an unstable egomaniac with an inflated and inflexible sense of purpose.

And while the pitch-perfect Benedict Cumberbatch, who has three movies at TIFF, makes Assange a compelling and charismatic central figure, the story is really told from the point of view of WikiLeaks insider Daniel Dornscheit-Berg (played by Daniel Bruhl), who left the organization and wrote the book “Inside WikiLeaks: My Time With Julian Assange and the World’s Most Dangerous Website.”

(The film also used “WikiLeaks: Inside Julian Assange’s War on Secrecy” by British journalists David Leigh and Luke Harding as a source.)

Also read: 10 Parties Not to Miss at the Toronto Film Festival

Because the story is told from the point of view of an employee who quit over Assange’s behavior, it necessarily paints a frequently dark picture of Assange, with his refusal to redact names of sources whose lives might be at risk with the release of the Afghanistan files.

But Assange, in the person of Cumberbatch, gets the last word: The final credits cut to the actor talking directly to the camera in what seem to be his actual words from an interview in which he was asked about the WikiLeaks movie in production.

“A WikiLeaks movie?” asks Assange. “Which one?” When he learns which one – i.e., the one we’re watching – he snaps, “That one is based on the  two worst books” about his organization.

But “The Fifth Estate” is far from the anti-WikiLeaks movie, as is made clear in a last-act speech from a British journalist played by David Thewlis, who functions more or less as the voice of reason in the film.

“You and Julian have charted a new course – and yes, the tyrants should beware,” he tells Bruhl’s character.

Other opening-day attractions at TIFF included a 30th anniversary screening of “The Big Chill”; a midnight screening of “All Cheerleaders Die” to kick off the Midnight Madness section, and showings of both Abdellatif Kechiche’s Cannes sensation “Blue Is the Warmest Color” and Asghar Farhadi’s “The Past.”

The former is a long, languorous, slowly paced and sexually explicit lesbian coming-of-age drama, with a searing central performance from Adele Exarchopoulos and enough universal emotional resonance to make it a consensus Palme d’Or winner from Steven Spielberg‘s jury.

The lengthy and numerous sex scenes also won the film an NC-17 rating in the United States, whereas in France it has been rated acceptable for ages 12 and over.

Asked by TheWrap this week what he thought about the rating, Kechiche declined to be quite as liberal as the French ratings board.

“It’s hard for me to say, but I have children,” he said through a translator. “And I wouldn’t want my [nine-year-old] daughter to see it before she was 13.”

Friday’s TIFF debuts will include Steve McQueen‘s “12 Years a Slave,” which won raves at Telluride, as well as Jonathan Teplitzky’s “The Railway Man,” with Colin Firth, and Peter Landesman’s “Parkland,” set in the Dallas hospital where John F. Kennedy was taken after being shot in 1963.