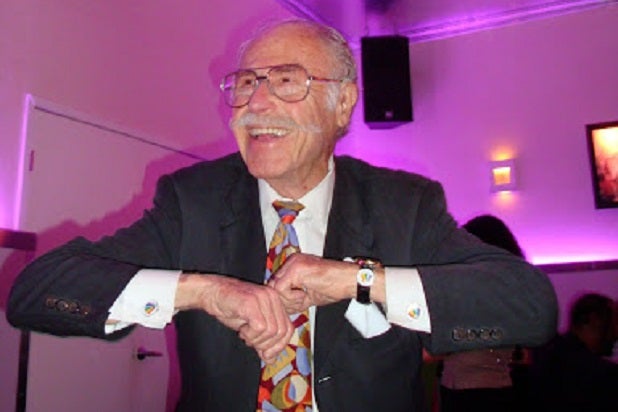 Julian F. Myers, a show business publicist who helped shape the images of stars including Marilyn Monroe, Mickey Rooney and Judy Garland, died Saturday of congestive heart failure. He was 97.

The passing of the Myers, a fixture on the Hollywood publicity scene for more than five decades, was confirmed to TheWrap by his family on Sunday.  In recent years, he had become one of the nation’s top senior runners, and finished first in his age group — over 95 — in a Utah marathon just two months ago.

He was the back-up publicist for Monroe for years, and remembered helping her make it to the set for a morning shoot after the actress had been out late the night before, in an interview with KCBS earlier this year.

‘I was the only guy trying to get her out of bed,” he joked, noting that he “was a happily married man.”

His death comes just two months after that of his wife of 43 years, attorney Patsy Nanna Myers, who died from complications from a stroke on Oct. 12 at age 89.

Myers was born in Detroit, Michigan on Feb. 22, 1918. He attended the Cranbrook Prep School before moving to Los Angeles to be one of the first students in USC’s Film School (then known as the Cinematography School), which he entered in 1937.

After graduating, he worked first at Technicolor and then at Columbia Pictures in the story department. It was there that he met Ruth Schultz, a studio messenger  who became his first wife. Their marriage lasted 25 years, and they had three children: Jon, Fredricka and Eric, who went on to become a unit publicist.

During Myers’ 13 years in the Fox publicity department, he concocted numerous promotional stunts.

He had the Hotel Roosevelt block out all the letters on its neon sign except the “EVE” in the center on the night that “All About Eve” premiered at Grauman’s Chinese.

For the 1952 opening of “The Snows of Kilimanjaro,” he arranged for two jackals — one named Kiliman and the other Jaro — to be flown in from Africa and welcomed at the airport by Fox contract player June Haver.

He then returned to Los Angele and began working for American-International Pictures, where he remained for 12 years before signing on with Hanson and Schwam Public Relations. In the early 1990s he went back into business for himself and represented, among others, Dennis Weaver until Weaver’s death in 2006.

Myers was a dapper dresser, and occasionally sported a bow tie. Even after he retired, he kept active at his PR firm in Marina del Rey, the city where he lived. Myers regularly sent handwritten notes of encouragement or musings about the industry to his associates in the business.

He was a faculty member at Loyola Marymount University and UCLA Extension, and taught classes in entertainment publicity.

Myers for years enjoyed participating in the Huntsman World Senior Games track meet in St. George, Utah, and last year competed in all 14 events in his age group and won 13 medals, including six gold medals at the age of 96.

Myers was old school. When he was honored by Entertainment Publicists Professional Society as one of the  “Legends in PR” a few years ago, he said, “Hollywood needs to bring back the gimmicks again.”

Earlier this year Myers received a career award from the publicists of the International Cinematographers Local 600, and he was honored with the Publicist’s Guild Robert Yeager Award in 1978 and Les Mason Award in 1980.

Even in his later years, he appreciated a good stunt. On his 90th birthday he ran 90 miles from San Diego to Los Angeles, stopped at the Oscars ceremony in Hollywood and capped it off with a celebration at a deli with 390 of his friends.

He and his wife Patsy even founded a global holiday — “Amigo Day ” — about 10 years ago.

“Just greet anyone, anywhere, your way, any month’s first Sunday,” he said at the time. Then he ran the Las Vegas Marathon to salute the new event.

In addition to his three children, 10 grandchildren, and four great-grandchildren, he is survived by his siblings Helen Gilbert of Sherman Oaks and Rod Myers of Detroit. A memorial service will be held in January, but details are still being worked out.