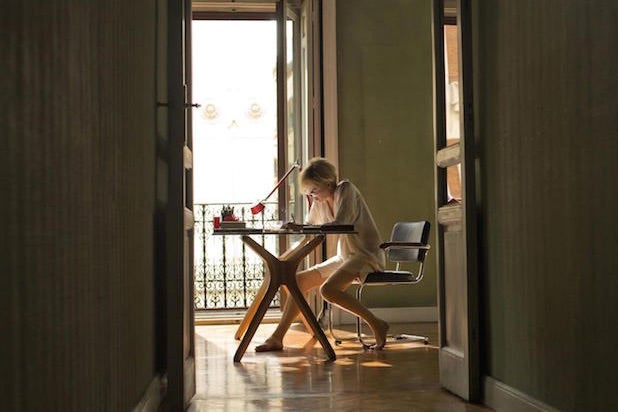 Pedro Almodóvar should fit right in at this year’s Cannes Film Festival, which was full of films that went over the top and deal with transgressive topics and lots of sex. After all, the Spanish director has been doing that kind of thing for decades.

Almodóvar 20th film, “Julieta,” is inspired by three short stories from the Alice Munro book “Runaway.” And perhaps surprisingly, it didn’t really fit with this year’s lurid Cannes titles like “Slack Bay,” “The Handmaiden,” “Staying Vertical” and “American Honey” — by comparison with those films, Almodóvar has relinquished his role as the prince of transgression to get downright decorous.

That’s not necessarily a bad thing, and a subdued Almodóvar is still a far sight weirder and more intriguing than most directors.

“Julieta” is Almodóvar in a languid, contemplative mood; it’s a meditation on parenthood and guilt that has the beauty of much of the director’s past work without the energy that sometimes highlighted his work and occasionally threatened to capsize it.

The film also came to Cannes as something of an oddity, because it arrived as a known quantity. While the vast majority of films that play the festival are making their world premieres here, Cannes allows films that have already screened in their home country to also play the festival.

Almodóvar’s film opened in Spain in April, where it drew mixed but largely positive reviews and a smaller box-office opening than the majority of the director’s films.

Originally planning to make the film in English with Meryl Streep in the lead role, Almodóvar eventually scrapped that idea and cast Spanish actresses Emma Suarez and Adriana Ugarte. The film deals with a woman who is trying to track down her daughter, who she hasn’t seen since the girl entered a spiritual retreat and then disappeared from her mother’s life while a teenager.

The movie and the characters are haunted by loss, but the film is floats on reminiscence and reverie; Alberto Iglesias’ music, jazzy and noir in a very Bernard Hermann-doing-Hitchcock way, tells us that things important and mysterious are taking place, but Almodóvar sticks to hints and allusions, not answers.

With its focus on a couple of female characters, the film is something of a return to the “cinema of women” that produced such Almodóvar classics as “Women on the Verge of a Nervous Breakdown” and “All About My Mother,” but in a lower key.

It is also visually rapturous, as is most of the director’s work. From the opening shot of a red curtain that turns out to be a woman’s blouse, there’s hardly a scene without a splash of vivid red in it; a couple of times a character describes the surroundings as “a real mess,” but Almodóvar creates impeccable messes in which memories dwell.

That’s a significant lineup of recent work that includes some of Almodóvar’s best films of the last two decades. Does “Julieta” belong in their company? Perhaps not, but it’s a worthy part of a canon in which decorous should never be confused with dull.