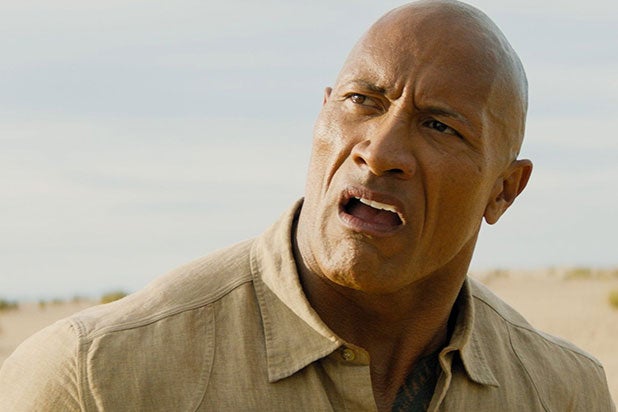 Jake Kasdan’s action-comedy “Jumanji: Welcome to the Jungle” was an unexpected smash in 2016, and with good cause. The film was a smart, exciting blockbuster that used video-game mechanics to tell an uplifting power fantasy.

After all, “Jumanji” asked, what are most video games if not a transportive experience, in which the player takes on powers and abilities beyond their own? And if that experience was literal, instead of merely simulated, how incredible would that be?

Kasdan’s sequel, “Jumanji: The Next Level” adds an all-new question to the franchise, and it’s surprisingly bleak: What happens after you come back from that empowering fantasy world and return to a humdrum life filled with all your old depressions and anxieties? “The Next Level” posits that life might have been hard before, but it can be borderline unlivable if you know there’s a better one waiting for you in a battered old console game in your mother’s basement.

“The Next Level” begins with Spencer Gilpin (Alex Wolff) avoiding his friends, who used their experience in the first “Jumanji” to grow up and lead happier lives. Spencer is retreating inward already, but then his grandfather Eddie (Danny DeVito), who is recovering from hip surgery, advises him to make the most of his youth because “getting old sucks,” and that clinches it.

He fires up the supernatural “Jumanji” game and disappears, forcing his friends Bethany (Madison Iseman), Fridge (Ser’Darius Blain) and Martha (Morgan Turner) to jump in after him and save the day. But there’s a problem. The console was broken, the game is different, and with exception of Martha, who still occupies the body of action hero Ruby Roundhouse (Karen Gillan), nobody is in the same body as last time.

Fridge has wound up in map expert Professor Oberon (Jack Black), while Grandpa Eddie and his estranged friend Milo (Danny Glover) — who have no idea what’s going on, or even how video games work — are now stuck instead Smolder Bravestone (Dwayne Johnson) and zoologist Mouse Finbar (Kevin Hart).

The plot of the game this time is a familiar rigmarole about finding a precious stone, defeating a powerful villain named Jurgen the Brutal (Rory McCann, “Game of Thrones”), and enduring a wide variety of action-packed set pieces involving deadly animals, hanging rope bridges and dune buggies. Our heroes might not be playing exactly the same game, but they’re still playing a straightforward follow-up where everything is pretty much identical, albeit bigger.

The real treat of “Jumanji: The Next Level” is watching Kasdan, who co-wrote the screenplay with Jeff Pinkner and Scott Rosenberg, start messing with the mechanics. It took a long time to organically explain the rules of video games and avatars in the original “Jumanji,” and those rules need to be explained once again to Eddie and Milo, but the sequel is free to take everything the audience learned and screw around with it, with amusing but sometimes mixed results.

The idea of a movie starring Dwayne Johnson as Danny DeVito, who recaptures his lost youth within the body of a godlike action hero, is absolutely delightful on paper. In practice, the delicate art of impersonating Danny DeVito proves beyond Johnson’s acting abilities. Johnson tries to capture DeVito’s signature line delivery but, for some reason, he adds a pronounced lisp, and spends most of the movie sounding more like Mike Tyson than the star of “Taxi” and “Batman Returns.”

Hart, however, is a real treat as Milo. The fast-talking comedian is being inhabited by an actor whose trademark is calm and measured delivery. It’s a lot like watching Hart act in slow-motion, which means it’s relatively close to what anyone else would consider normal. But when killer ostriches are attacking and only Milo knows what to do (because, again, his character is a zoologist), waiting patiently for him to get to the point is a brilliant and suspenseful comedic exercise.

The problem with “Jumanji: The Next Level” is that it doesn’t seem to know how to make the most of all these great ideas. The adventure storyline is so standard that it doesn’t have much impact on the characters or their journeys, and most of the development they have comes from the long periods of just walking around and talking in between action sequences. The idea of using escapist fantasy as an unhealthy coping mechanism for depression is blown up pretty early, since escapism is the whole point of the movie and nobody wants to make “Jumanji” look less fun than real life.

Towards the end, as “The Next Level” incorporates new ideas about how these video game avatars work and what they are capable of, the film teeters towards a transhumanist philosophy. Maybe a place like “Jumanji” could be ideal for people like Eddie and/or Milo, whose aging bodies have been radically transformed and upgraded. But some characters learn the exact opposite lesson, so it’s hard to suss out exactly what “Jumanji” is getting at. Other than the world they’ve created is really weird and full of conflicting possibilities. (Not, in all fairness, unlike the real one.)

As broad, action-comedy entertainment, “Jumanji: The Next Level” gets the job done. The cast is as good or better than before, except maybe for Johnson (does he really think DeVito talks like that?), but he’s still giving a fun performance. The action sequences are thrillingly conceived and realized. Cinematographer Gyula Pados gives the film a unironic adventure aesthetic, just like he did in “Welcome to the Jungle,” which cements the video-game world in a pleasingly pulpy reality.

Then again, if you’re only looking for a standard high-concept action comedy, you’ll probably find “The Next Level” to be familiar territory. On a superficial level, it’s the same type of adventure, only slightly different, with a few modifications to the characters. And on a deeper level, it’s a little thematically confused, so it’s not exactly an improvement on the original.

But it is, most importantly, amusing and creative. It may not follow its storylines to the most logical conclusions, and it may not reinvent the action movie as we know it. It’s still an enjoyable blockbuster sequel that tries to infuse the original idea with a couple new ideas, while setting the stage for more exciting adventures to come.