Fans will be able to chomp down on even more of “Jurassic World Dominion” later this month, when an extended cut of the film hits home video. The extended edition boasts 14 minutes of additional footage, including an alternate opening, and will be released on Digital, 4K Ultra HD and Blu-ray on August 16.

The home video release also boasts a bevy of bonus features, including featurettes on the film’s VFX, the evolution of the franchise, how the dinosaurs were created and even a look at the emotional final night of filming with the cast and crew. Additionally, the Digital and Blu-ray versions of the film include the Colin Trevorrow-directed short film “Battle at Big Rock,” which takes place one year after the events of “Jurassic World: Fallen Kingdom.”

Trevorrow previously told TheWrap about why he cut the prologue out of the theatrical cut of “Jurassic World Dominion” while hinting that an extended cut was coming. 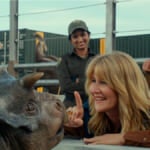 “[It was] maybe too Malick-ian for a big summer movie. It was the beginning of the movie, it’s the first five minutes of the film and something I’m very proud of,” Trevorrow said. “In our negotiations for how long this movie could be, and it’s still a pretty long movie, we realized that it was going to have to go. Universal supported my request to just give it to everyone for free and let people watch this prologue as a way to bring them into the world that we were creating. Hopefully, and I could almost say assuredly, someday you will be able to see it again.”

Indeed, fans will be able to see that prologue and much more cut back into the film with the “Jurassic World Dominion” Extended Edition, which runs a dino-sized 160 minutes in length.

* At participating Digital retailers
** Included on all formats including DVD