“Jurassic World Dominion” is now playing in theaters, and those venturing out to see the blockbuster sequel may be wondering one crucial thing: is there a post-credits scene?

It’s a fair question. The last “Jurassic” film, 2018’s “Jurassic World: Fallen Kingdom,” had a short post-credits scene at the end of the film that very much teed up what “Dominion” was going to be about. After the dinosaurs at the film’s central mansion were let loose, we saw a dino looking over a sprawling suburban neighborhood, teeing up the infestation to come.

So is there anything after the credits of “Jurassic World Dominion”? No, there is not. When the movie’s over, it’s over. So you very much can sit through the credits to see the many, many folks who put their hard work into making the film (and bask in Michael Giacchino’s score), but there’s no credits scene.

This is in keeping with the conclusive nature of “Dominion,” which co-writer and director Colin Trevorrow has said closes the door on this particular chapter of the “Jurassic” franchise that he began with 2014’s legacy reboot “Jurassic World.”

Will there be more “Jurassic World” movies after this? It depends on the box office, but probably. This is a crucial franchise to Universal’s bottom line, and while “Dominion” closes the book on certain characters’ stories, it also leaves the door open to follow others (especially newcomers) forward. 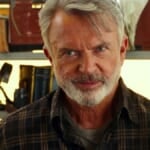