The generous read on “Jurassic World Dominion” is that it’s a metaphor unto itself; the ongoing moral of the film series is that mixing the wrong strains of DNA leads to disaster, and that lesson is writ large in the awkward and clumsy attempt to graft the stars of the original “Jurassic Park” onto the “Jurassic World” movies, a combo platter that only serves to make the latter-day protagonists even less interesting by comparison.

The other generous read, although it’s damning with faint praise, is to call this the best “Jurassic” movie since the original in 1993, but that doesn’t mean this one’s not, much like its predecessors, a hot mess. It’s just a hot mess with some effectively scary bits, a cool car chase and Laura Dern.

“Dominion” spends so much time jumping back and forth between the “Park” cast and the “World” plot that one can only hope editor Mark Sanger (“Gravity”) received combat pay. We’re left with a film with a terminal case of “Meanwhile…” 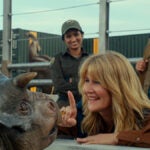 The film opens with a witty NowThis News segment showing life on Earth following the events of “Jurassic World: Fallen Kingdom,” in which dinosaurs escaped their theme-park captivity and integrated themselves into the planet at large. It’s been a somewhat smoother integration than you might imagine — only 37 human deaths in the previous year — but still a complication for mankind and the environment. Hoping to find the upside of all this is billionaire Lewis Dodgson (a reference to the author of “Alice’s Adventures in Wonderland” that leads nowhere), who has opened a dino-sanctuary in the Italian Alps where he hopes to harness their DNA in order to cure diseases.

Since there’s no pretending for even a second that Dodgson (played by Campbell Scott) isn’t our villain, he does at least serve as the fulcrum for getting the band back together. Dr. Ellie Sattler (Dern) suspects that Dodgson is behind the swarms of genetically altered locusts destroying American crops — except, of course, for the ones grown from Dodgson’s biotech seeds. (That first locust attack counts as one of the aforementioned effectively scary scenes.) Ellie asks her old pal Dr. Alan Grant (Sam Neill) to join her on a visit to Dodgson’s compound so that he can attest to her discoveries. Their way in? Chaos specialist Dr. Ian Malcolm (Jeff Goldblum), of course, who’s currently serving as Dodgson’s in-house philosopher. 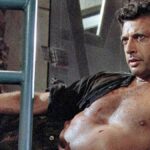 Meanwhile, Owen Grady (Chris Pratt) and Claire Dearing (Bryce Dallas Howard) are hiding out in the Sierra Nevada mountains in an attempt to hide young clone Maisie Lockwood (Isabella Sherman) from the world. Claire spearheads stealth raids on illegal dino breeding farms while Owen goes full cowboy. (There’s an early shot of a roundup where the CG dinosaurs look far more realistic than Owen on horseback, which has to represent a new kind of uncanny valley.)

Dodgson arranges for the kidnapping of Maisie — and of Beta, a raptor which, like Maisie, was the product of asexual reproduction — so Owen and Claire are off to Malta and then, with the help of rogue pilot Kayla Watts (DeWanda Wise, “The Harder They Fall,” Netflix’s “She’s Gotta Have It”), to Dodgson’s lair.

The screenplay by director Colin Trevorrow and Emily Carmichael (“Pacific Rim: Uprising”) spends so much time moving its cast from place to place that it can barely be bothered to provide twists or sleuthing; characters like Mamoudou Athie’s PR flack or Dichen Lachman’s sleek assassin show up, tell the heroes what they need to know, and then sink into the background. There’s certainly no room for any big ideas about science or technology besides, “Whelp, the dinos are here now; guess we gotta coexist.” (Somewhere, there’s a critical paper waiting to be written about “Dominion” and “Crimes of the Future” implying that the future of mankind consists of lying in the bed we’ve made of the global environment.) 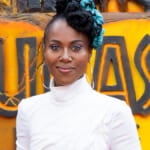 Also Read:
DeWanda Wise Opens Up About the ‘Painful’ Reason Why She Had to Exit ‘Captain Marvel’

Were it not for the exigencies of mega-budget trilogies, “Jurassic World Dominion” could have easily existed without Owen or Claire at all. Seeing Dern, Neill, and Goldblum back in the saddle again feels far more exciting than anything that Pratt or Howard are called upon to do, with the exception of a thrilling chase through Malta. That’s the moment where the parallel editing really pays off, as we cut between Atrociraptors chasing Claire and Kayla in a truck and Owen on a motorcycle, all heading to the same destination. Give that chase to the film’s other heroic trio, and we’re getting somewhere.

Instead, there’s a ridiculous amount of bloat involving Maisie’s past and how she might affect the future — B.D. Wong’s scientist is given a line about this, and then he’s forced to repeat it in three different scenes — and a drinking-game-level number of moments in which Owen controls, or attempts to control, a dinosaur by sticking his hand out in front of him. That’s the bulk of Pratt’s forgettable performance; his blankness is matched by Scott’s predictably socially awkward billionaire, a clichéd trope in the Age of Zuckerberg.

Dern and DeWise both pop here, so it’s a pity they don’t get to share more screen time. Neill and Goldblum know exactly what movie they’re in, coolly coasting on decades’ worth of accumulated audience goodwill, and Howard gets closer to having a recognizably human, intelligently devoted character to play, with sensible footwear to match.

The makers of “Jurassic World Dominion” are currently making the never-kept promise that this film marks the end of the franchise, but when it comes to lucrative inanity, Hollywood, like nature, always finds a way.