News of Justin Smith’s departure as CEO of Bloomberg Media was first reported by the Wall Street Journal Tuesday. The Times followed that up with the announcement that Ben Smith, who was hired away from BuzzFeed to be the storied paper’s media columnist in 2020, would be joining him. 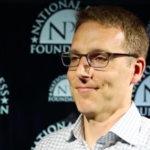 “There are 200 million people who are college educated, who read in English, but who no one is really treating like an audience, but who talk to each other and talk to us,” Ben Smith told the Times. “That’s who we see as our audience.”

“After 8 years at Bloomberg Media, and more than 25 years in quality journalism, I’ve decided to pursue a personal dream, and a market opportunity, to launch a new kind of global news media company that serves unbiased journalism to a truly global audience,” tweeted Justin Smith, who shared a link to the Journal report.

Per the Journal, Scott Havens will succeed him as Bloomberg Media CEO. Justin Smith plans to raise significant funding, the paper also reported.

The new startup will include a digital publishing outlet, newsletters, podcasts and a video component.

In his own tweet, Ben Smith simply said he is “so excited about this.” During his short time with the Times, he broke a number of stories, notably revealing that an executive at Ozy Media impersonated a Google executive in a call with Goldman Sachs employees.