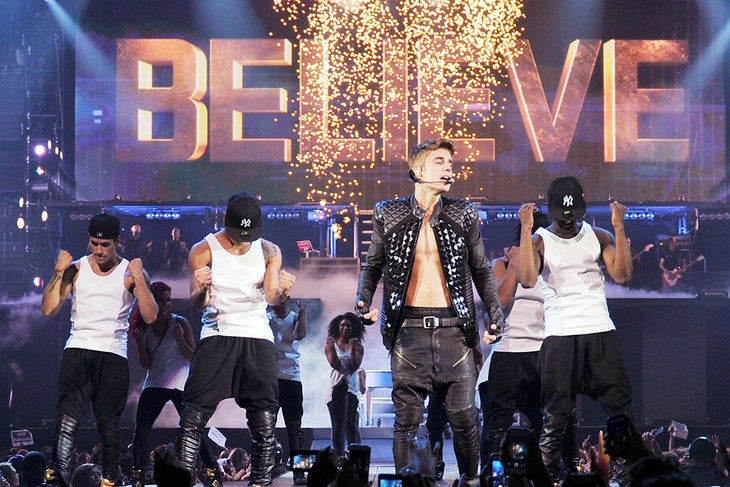 This year alone, Bieber made headlines for being a neighborhood menace in his gated Calabasas, Calif. community, smoking pot, getting booed on stage at a major awards show and urinating in public — on camera. While that kind of behavior might actually turn on hormonal teenagers pining to get a piece of the tatted-up bad boy, it probably turns off the parents paying for their movie tickets.

Inspired by both Bieber’s box office dud and the internet’s tradition of churning out an endless amount of year-end lists, here are Bieber’s most memorable lowlights of 2013:

A lawsuit revealed Bieber may be an abusive jerk who picks fights on men much bigger than his own size, and who are also being underpaid to protect him
The first sign of a troubled year arose when a man claiming to be Bieber’s former bodyguard filed a lawsuit seeking nearly $500,000 in damages for denied overtime and vacation pay, expenses, and being assaulted by the famous teen, who allegedly “repeatedly punched” the man before firing him. (Bieber was supposedly upset that the bodyguard was keeping a valued member of his entourage away).

Bieber took advantage of Anne Frank House museum visit for shameless self-promotion
When Bieber wrote that he hoped the deceased Jewish icon “would have been a Belieber” while visiting the house where she hid during the Holocaust, he probably meant well. The majority of those outside of his screaming fandom, however, saw the comment he wrote in the museum’s guestbook as a self-centered and insensitive way to remember the teenage diarist who died in a Nazi concentration camp.

Bieber got booed while accepting the Milestone Award at the 2013 Billboard Music Awards
Even though Bieber was voted as the most innovative artist of the year, the audience at the MGM Grand Garden Arena in Las Vegas last May was audibly mixed, as booing nearly overwhelmed the cheers of support when Bieber took the stage. It didn’t help that he was wearing sunglasses at night to accessorize his short-sleeved leather blouse, and then demanded: “I’m an artist and I should be taken seriously.” If would just stop using a time travel machine to go clothing shopping, then maybe his critics would consider. Watch Bieber get booed in questionable style, below:

Bieber was revealed to be a likely pothead
Despite numerous indications that Bieber enjoys the recreational use of marijuana, he has yet to be officially busted for possessing the illegal drug, but one of the buses touring with the singer was last July when a K-9 unit sniffed out reefer and drug-related paraphernalia as it passed through the U.S. border from Canada. The stash was confiscated, and the bus driver was issued a penalty before being allowed to continue to Bieber’s next show. Bieber was not on the bus, but TMZ captured video of a bus Bieber was on — filled with “a Hiroshima-level cloud of smoke,” earlier this month — just in time to get parents jazzed about taking their kids to see “Believe.”

Bieber peed in public and insulted a former President of the United States in 45 short seconds
Video emerged in July of Bieber peeing in a mop bucket at a New York City restaurant, while his entourage (who call themselves the Wild Kidz) cheered him on. Moments later, Bieber declares “f–k Bill Clinton” while spraying his picture with a bottle of cleaning fluid. Bieber eventually apologized for insulting the former President, but never said sorry to the poor janitorial staff who had to dispose of his urine.

Bieber was accused of hitting a photographer with his car and fleeing
Bieber was accused of committing a hit and run after his Ferrari collided with a paparazzo’s leg, and “briefly” pinned it against a car parked in front of Bieber’s outside a Sunset Blvd. nightclub. Fortunately for the young singer, the Los Angeles District Attorney declined to pursue the charge due to “insufficient evidence” that Bieber actually knew he had hit the man.

Bieber came out of the closet as a reckless speed demon
Bieber was fined for speeding through Dubai earlier this year, while numerous neighbors complained of his frequent speeding through their gated Calabasas, Calif. community. The tales of reckless endangerment climaxed when one of his biggest neighbors, former NFL star Keyshawn Johnson, reportedly chased down Bieber’s speeding Ferrari in an attempt to confront him. The L.A County District Attorney declined to file charges against Bieber after rapper pal Tyler, The Creator, admitted it was him behind the wheel.

Bieber abandoned his pet monkey in Germany, and never paid the country back for the cost to care for the animal
Bieber was unable to cough up proper documentation to for his capuchin monkey, Mally, after the animal was confiscated at Munich airport during the singer’s European tour last March, so it eventually found a new home at a German zoo. Since Bieber brought the animal into the country, Germany’s Federal Agency for Nature Conservation expected him to foot the pricey bill for Mally’s care. As of November, Bieber still did not pay a dime of it, and the bill had grown from $1,500 to $11,000.

Bieber sets the record straight on who he has sex with (“bitches,” by the way)
As Open Road Films prepared to release “Believe,” Bieber continued to kill his family-friendly image by declaring he has sex with “bitches” (others have gone as far to describe them as “women” or “females”) when comedian Chris D’Elia mocked the singer for his fashion sense during a stand-up comedy show at the Laugh Factory in Hollywood.