Kanye West shared a music video to Instagram on Wednesday that showed him – or rather, a claymation version of him – burying ex-wife Kim Kardashian’s boyfriend Pete Davidson.

The video shows a hooded figure dragging a tied-up figure resembling Davidson to a grave and burying him up to his head. The rapper then sprinkles rose seeds on the burial spot and returns to trim the full-grown roses while the buried figure rots. The video ends with the title cards, “and everyone lived happily ever after, except for Skete. (You know who). JK. He’s fine.” West has repeatedly used the nickname “Skete” to refer to Davidson on social media.

The song “Eazy,” a collaboration with The Game, features lyrics about Kim, her sister Kourtney and, of course, the object of many of Ye’s recent online rants, Davidson. 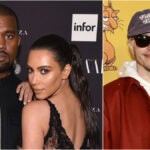 Also Read:
Kanye West Goes Off the Rails in Desperate Plea to Win Back Kim Kardashian

“We havin’ the best divorce ever/If we go to court, we’ll go to court together
Matter of fact, pick up your sis, we’ll go to Kourt’s together…
Noncustodial dad, I bought the house next door
What you think the point of really bein’ rich for…
God saved me from that crash
Just so I can beat Pete Davidson’s a– (who?)”

Also on Wednesday, a Los Angeles judge granted Kim legally single status. Kardashian, who filed for divorce in Feb. 2021, told the court that her ex-husband’s constant posts begging her to come back to him and questioning her parenting choices on social media have caused her “emotional distress.”

“I very much desire to be divorced. I have asked Kanye to keep our divorce private, but he has not done so,” Kardashian wrote in court documents. “Kanye has been putting a lot of misinformation regarding our private family matters and co-parenting on social media which has created emotional distress. I believe that the court terminating our marital status will help Kanye to accept that our marital relationship is over and to move forward on a better path which will assist us in peacefully co-parenting our children.”