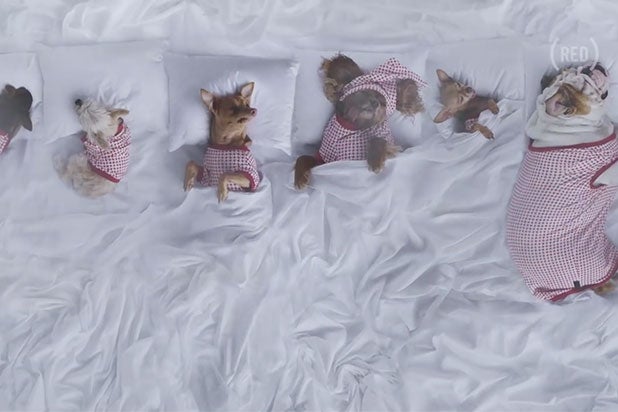 Kanye West has kept a low profile of late, but Instagram’s top dogs have rushed to fill the void in a parody of the rapper’s explicit music video for “Famous.”

In the video, 10 of the photo-sharing site’s most famous canines get closeup shots while laying in bed, only for the camera to zoom out and reveal an image similar to West’s music video, which included realistic naked wax sculptures of Taylor Swift, Drake, Donald Trump and Rihanna.

In the parody music video, however, the dogs aren’t nude — instead, they’re wearing cute matching red pajamas. Bedhead and (RED) partnered up to create the little outfits, which can be purchased for $28 online.

“Bedhead’s contribution to (RED)’s fight against AIDS can provide over 50,000 days of life-saving HIV medication,” the product description reads.

The canine celebrities include Chihuahua Dachshund Tuna and a King Charles named Toast. Similar to West’s now-infamous music video, their names are listed at the end.

(RED) was founded by Bono and Bobby Shriver to fight AIDS. According to its website, the organization has raised $365 million with the help of their various fundraisers.

West’s original song renewed his feud with Taylor Swift when he rapped, “I feel like me and Taylor might still have sex. Why? I made that bitch famous.”