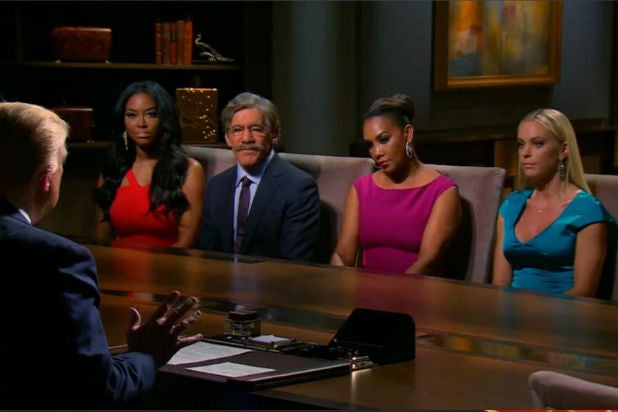 Kate Gosselin kept her cool when she was given the boot on NBC’s “The Celebrity Apprentice” Monday night, but now she’s not holding back.

“It should have been Kenya [Moore],” Gosselin told TheWrap Tuesday. “I was aware of the fact that statistically, the project manager is more than 50 percent of the time fired. On this occasion, there were tangible reasons.”

Gosselin was referring to the heated exchange between her teammates Moore and Vivica A. Fox. The “Kate Plus 8” star believes the ladies’ constant bickering and theatrics led to Team Vortex’s crushing defeat.

“Stop it, baby,” Fox told Moore during a boardroom battle. It started when host Donald Trump asked Fox if she was a fan of Moore. All the actress could say was “she’s attractive” — not exactly a stamp of approval.

“That went on for about an hour,” Gosselin said. “There was a lot that wasn’t seen, but I don’t know if I have an opinion on it. I was there and let them go on without me being a part of it. I don’t know if they were being real or acting.”

But Gosselin said make no mistake, everything she did during the competition was authentic.

“I was real every moment of that show,” she insisted. ” I learned a lot about myself and how low some will go to win. I don’t need to say names, and in real life, there are those who will do anything to get ahead. If you have to win that way, pull out that menagerie of tricks, that’s not winning.”

Stay tuned for more theatrics on next week’s episode of “Celebrity Apprentice,” Monday at 8 p.m. on NBC.