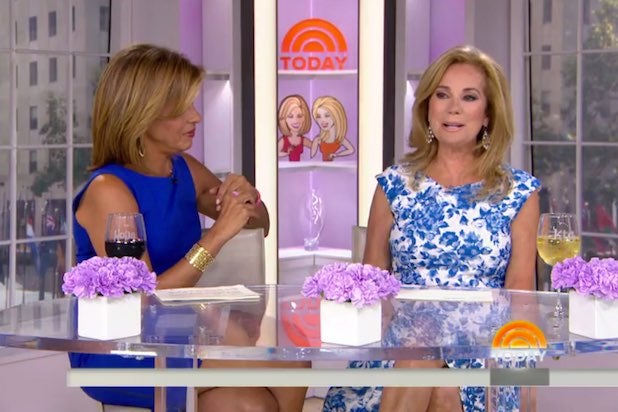 Kathie Lee Gifford returned to the “Today” show on Monday for the first time since her husband Frank Gifford’s death.

Kathie opened the show with an emotional tribute by saying, “The Lord giveth, and the Lord taketh away.” She went on to thank friends and family for their support, and share memories of her late husband.

See video: Meredith Vieira Sports Huge Black Eye on 'Today' Show: 'I Should Watch Out For Myself'

During the segment, the TV personality explained that because her husband grew up poor during the Great Depression, he wasn’t one to take things for granted.

The emotional tribute ended with a hug and a kiss from Gifford’s co-host Hoda Kotb as a box of tissues was dropped onto the set.

Frank, an NFL Hall-of-Famer and former “Monday Night Football” sportscaster, died on Aug. 9 of natural causes in his Connecticut home. The couple married in 1986, and had two children together, in addition to Frank’s three children from a previous marriage.