Even Elon Musk can’t stop Kathy Griffin. The comedian is back on Twitter after her account was suspended for impersonating the embattled CEO from her late mother’s account with some choice words for the new Twitter boss.

“I mean… you stole that joke, you a–hole,” Griffin tweeted from her mother, Maggie Griffin’s, Twitter account Sunday. “People have been posting that joke for hours, you hack. Look, please do a better job running this company. It used to mean something. This is KG btw.”

The comedian bounced back after her account was suspended due to Musk’s newly instated policy which threatens permanent suspension for any “Twitter handles engaging in impersonation without clearly specifying ‘parody'” after Griffin and a slew of celebrities changed their display names and photos to mimic Musk’s profile.

Also Read:
Here’s All the Celebrities Who Have Left Twitter Since Elon Musk Took Over

Griffin was clearly not done having her fun with the loophole account, tweeting “#FreeKathy,” responding “Boo!” to another tweet from Musk and trolling the Tesla CEO with the ghost of her mother.

“Elon, this is Maggie contacting you from the spirit world tell u…you’re a d—–bag,” Griffin tweeted Monday. “This is not parody. This is the actual ghost of Kathy Griffin’s boxed wine loving mother saying I’m gonna get tipsy & throw my bingo cards at you! NOT A PARODY. To the moon, a**hole. #FreeKathy“

She also encouraged her followers to check out a TikTok video recapping the saga of Griffin’s suspension and subsequent revenge, tweeting, “I defy you guys to get through this without laughing. This is great.”

Despite some users’ claims that Griffin was now impersonating another person, her mother, the actor quelled any concerns by saying, “My wonderful mother had an account that I ran for her. She passed away, but I always kept the account.”

“Trust me, she would be with me on this,” Griffin confirmed. “Relax.”

The comic also changed her mother’s avatar photo to Musk’s, in a continued attempt to impersonate the Twitter CEO.

Though Griffin’s account says it is “suspended,” it is unknown if the Emmy winner is permanently banned or if the new policy will take effect following Griffin’s suspension, as Musk suggested. 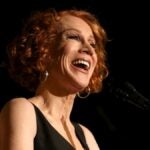