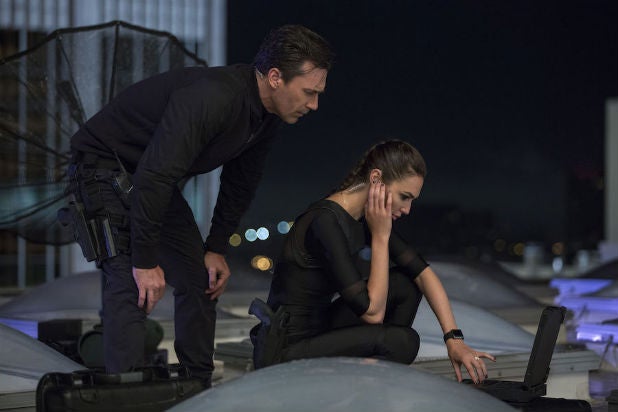 Critics aren’t down to keep up with the Jones family — the first reviews for “Keeping Up with The Joneses” are in, and they’re not good.

Reviews call the film “flat and uninspired,” “infuriating” and “a waste,” accounting for an 15 percent Rotten Tomatoes score.

In fact, several critics have called the film a waste, with TheWrap’s film critic Alonso Duralde saying that the actors “waste their time and ours.”

Also Read: 'Keeping Up with the Joneses' Review: Jon Hamm and Zach Galifianakis Waste Their Time, and Ours

“Bad movies often get made with the best of intentions, and promising source material can go south for any number of reasons, but ‘Keeping Up with the Joneses’ is so staggeringly mediocre and bereft of ideas that it seems impossible to believe that Jon Hamm, Zach Galifianakis, Gal Gadot, Isla Fisher and director Greg Mottola (‘Adventureland’) went to work every day feeling anything but a gnawing sense of time being wasted.”

The film is about a suburban couple that becomes enthralled with its seemingly perfect neighbors, who turn out to be government spies.

Read the seven most merciless reviews below.

Steve Persall, Tampa Bay Times:
“‘Keeping Up with the Joneses’ is so flat and uninspired than its MacGuffin is microchips (again) and not even bringing in Patton Oswalt as a closer can save it. Zany just slumped out of the room, with madcap dragging behind.”

Bilge Ebiri, Village Voice:
“Even those of us with a soft spot for dumb, high-concept Hollywood comedies might be outraged by the limp, unfunny nothingburger that is ‘Keeping Up with the Joneses.’ A wan attempt to mix the comedy of domestic anxiety with the comedy of inept espionage — think ‘Neighbors’ meets ‘Central Intelligence’ — Greg Mottola‘s film plays like a rough outline waiting to be filled in. It’s as if somebody wrote out the basic setup, figured they would flesh out the character bits and plot twists and jokes later … and then never got around to it. It’s dispiriting and infuriating all at once.”

Matt Donato, We Got This Covered:
“‘Keeping Up With The Joneses’ plays everything so disappointingly safe. Momentary action asides bullets and kill henchmen while the Gaffneys cower in the corner, and a cameo appearance by one of today’s geek stand-up kings is nothing short of face-recognition laughs. Galifianakis finds himself in yet another role that keeps him cheery, sunny and predictably oblivious to life’s darker side. Never, not once, is there any notion of deviating from norms in Michael LeSieur’s paint-by-numbers screenplay — there’s nothing more to say then you’ve seen this all before, and you’ll see it all again.”

Chris Barsanti, Film Journal International:
“‘Keeping Up with the Joneses’ carries with it the aura of the kind of disastrous comedy that usually gets dumped unceremoniously in the tail end of a slow summer. But while an October release for a turkey like this is unusual, that doesn’t make the film itself any less of a waste.”

John Hazelton, Screen International:
“The script by Michael LeSieur (‘You, Me, and Dupree’) provides very little for the cast to build on and even with comedy dab hand Greg Mottola (‘Superbad’ and ‘Adventureland’) directing the film often feels flat when it should be light-footed.”

Peter Canavese, Groucho Reviews:
“‘Joneses’ earned a delay from early April to late October, which is evident from the terrible wig slapped on Jon Hamm for the reshoot of a cobra-themed-restaurant scene. Reshoots didn’t help (this is, after all, a film that dusts off the accidental-snake-bite scene and the accidental-sleep-dart scene). Comedy cannot exist in a vacuum. ‘Keeping Up with the Joneses’ totally wastes the time of a handful of very funny actors, a hard-working crew, and everyone else unfortunate enough to wander into this unfortunate, unpleasant, unfunny movie.”

Ed Gonzales, Slant Magazine:
“By the time ‘Keeping Up with the Joneses’ limps toward its Marrakech-set epilogue, there’s a sense that the film’s experiment in social osmosis is as much a failure as its B-sitcom-grade yuks. In the end, the only lesson anyone learns is the one we pick up from the no-fucks-given faces of the Joneses.”