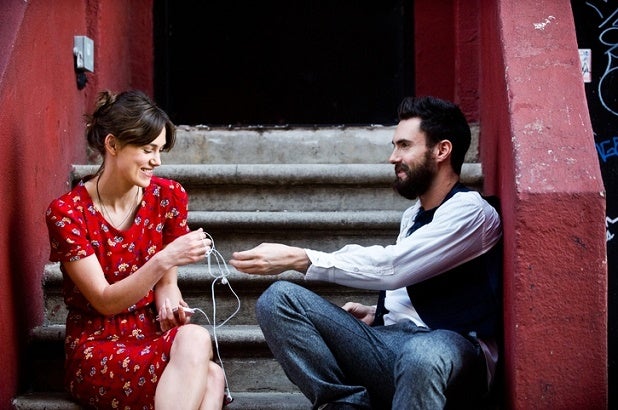 “Begin Again,” the romantic comedy starring Keira Knightley and Mark Ruffalo and featuring the acting debut of Adam Levine, is off to a promising start at the specialty box office.

The Weinstein Company debuted the film, written and directed by John Carney (“Once”), in five theaters and it brought in $148,325 for an impressive $29,665 per-screen average.

“Begin Again” played at the 2013 Toronto Film Festival as “Can a Song Save Your Life.” It tells the story of Gretta (Knightley) and her long-time boyfriend Dave (Levine), college sweethearts and songwriting partners who decamp for New York when he lands a deal with a major label. But his newfound fame soon tempts Dave to stray, and a reeling Gretta is left on her own.

The first weekend crowd skewed toward women, with more than two-thirds of the audience female. That should change, TWC distribution chief Erik Lomis told TheWrap.

“Guys are going to like it more than they might think going in,” he said. “It’s a perfect date movie and we think it’s going to play very well for the rest of the summer.”

The reviews have been good (72 percent positive on Rotten Tomatoes) and Lomis said the exit polls were strong. TWC’s plan is to go nationwide into 45 markets and 175 theaters next weekend and add 500 more locations the following week.

It was also a strong first weekend for “Snowpiercer,” the South Korean sci-fi action film. TWC’s specialty label Radius rolled it out in eight theaters and it tallied $165,000 for a $20,625 per-screen average.

“Snowpiercer,” directed by Bong Joon-ho and written by Bong and Kelly Masterson, tells the story of an experiment to counteract global warming that causes an ice age that kills nearly all life on Earth. The only survivors are the inhabitants of the Snowpiercer, a massive train that travels on a globe-spanning track. A class system is installed, with the elites inhabiting the front of the train and poor inhabiting the rear of the train. Chris Evans, Octavia Spencer, Tilda Swinton and John Hurt star.

“America,” the latest documentary from conservative author and filmmaker Dinesh D’Souza, connected in its debut in Atlanta and Houston. It brought in $39,000 from three theaters for a $13,000 per-screen average.

Distributor Lionsgate plans to go nationwide with “America” on Wednesday, hoping to cash in on the patriotic fervor around the July 4 holiday.