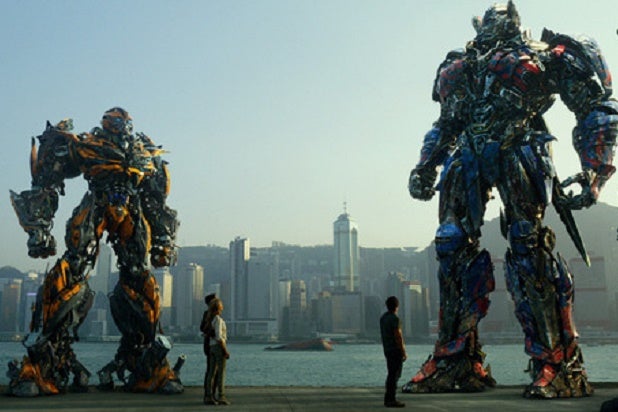 Michael Bay‘s “Transformers: Age of Extinction” this weekend became the first movie of the year to open to $100 million at the domestic box office.

Paramount’s mega-budget morphing robots epic had to overcome terrible reviews, massive expectations and a sluggish summer box office to do it, and final numbers could change that total on Monday, but the fourth entry in the $2.8 billion titanic toy franchise delivered.

The $200 million “Age of Extinction,” a co-production with several Chinese companies, is a truly global blockbuster. It brought in more than $201 million from 37 foreign markets as well, including an opening weekend record $90 million from China, giving it a $301.3 million first weekend worldwide.

Mark Wahlberg took over from the troubled Shia LeBeouf as leading man in “Age of Extinction,” and the opening is by far the biggest of his career. The opening, in a saturation-level 4,233 theaters, came in under the second “Transformers” movie, “Revenge of the Fallen,” which debuted to $108.9 million on this same weekend in 2009. But the big debut provided a shot in the arm for the summer box office, which is running nearly 15 percent behind last year’s record $2.3 billion season.

The critics skewered “Age of Extinction,” and it had a weak 17 percent positive rating on review aggregation site Rotten Tomatoes. But the audience, which skewed male (64 percent) and surprisingly older with 58 percent over the age of 25, loved it and gave it an “A-” CinemaScore.

A movie has to play broadly to get to $100 million, but it was hardcore fans of the franchise who turned out early and lifted “Age of Extinction” to the biggest opening day of any film this year with $41 million on Friday. That included $8.7 million from early Thursday shows.

“Transformers 4” got a major boost from IMAX theaters. It’s is the first film shot with an IMAX 3D Digital camera and was in all 353 of the large-screen giant’s North American theaters. Nine of the film’s top ten runs were at IMAX theaters and it brought in $10.7 million overall. It also earned an additional $7 million on Premium Large Format screens, meaning about 18 percent of its grosses came from large-format venues. In all, 3D accounted for 47 percent of the grosses.

The question of whether or not “Transformers” would hit $100 million provided most of the drama this weekend.

Sony’s “22 Jump Street” finished a distant second with $15.4 million. That lifts the domestic total of the Channing Tatum-Jonah Hill comedy sequel to nearly $140 million, and means it has topped the $138 million domestic take of the original film in only three weeks.

The dropoff for “Jump Street” was just 44 percent from last week, but another Sony sequel didn’t fare so well. Kevin Hart’s “Think Like a Man Too,” last week’s No. 1 movie, fell 64 percent and brought in $10.4 million, which put it in fourth place and upped its domestic total to $48 million.

Also read: ‘Transformers 4': Why Its Huge China Opening is a Game-Changer for Hollywood

DreamWorks Animation’s “How to Train Your Dragon 2” was third with $13.1 million in its third weekend, and the Fox-distributed family film is at $121.8 million domestically.

Disney’s “Maleficient” conjured $8.2 million in its fifth week and the Angelina Jolie live-action fairy tale crossed the $200 million mark domestically in the process. It’s taken in more than $530 million worldwide.

Sony’s “The Amazing Spider-Man 2” also crossed $200 million mark this weekend, though it took it two months to do it. “The Lego Movie,” “Captain America: The Winter Soldier” and “X-Men: Days of Future Past” have hit that mark so far this year, and “Godzilla” is closing in.

The Clint Eastwood-directed musical “Jersey Boys” dropped 43 percent from its opening weekend and finished sixth with $7.6 million. That’s a positive sign for Warner Bros., which hopes the mature-skewing biopic of the Four Seasons singing group will play steadily over the next few weeks. It’s up to $27 million domestically.

“The Edge of Tomorrow” was seventh with $5.2 million and the Tom Cruise sci-fi action film is up to $84 million domestically for Warner Bros. It’s been much stronger overseas, and recently crossed $300 million worldwide.

“The Fault in Our Stars,” “X-Men: Days of Future Past” and “Chef” rounded out the top ten. It marked the sixth straight weekend in the top ten for Jon Favreau’s low-budget food truck comedy, which is up to $19.4 million domestically for distributor Open Road Films.

“Begin Again,” the romantic comedy starring Keira Knightley and Mark Ruffalo and featuring the acting debut of Adam Levine, is off to a strong start at the specialty box office. The Weinstein Company debuted the film written and directed by John Carney in five theaters and it brought in $148,325 for an impressive $26,665 per-screen average.