“You need a psych eval and possible commitment, voluntary or otherwise, @RealCandaceO. You have brought nothing but shame to this country, and your sole accomplishment in the whole of your worthless life was kissing Trump’s fascist ass,” the former ESPN and MSNBC host tweeted to his 1 million followers. 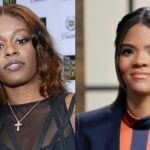 Included in his tweet was a screenshot of one from Owens reacting to the U.S. women’s soccer team’s semifinals loss to Canada at the Tokyo Olympics.

“Not heartbreaking at all,” Owens said of the loss. “[Player Megan Rapinoe] is an anti-American piece of trash who does not represent our country, anywhere, ever. Any person who disrespects the the flag that sons and daughters are sent home beneath while fighting for our freedoms overseas, deserves to lose. Repeatedly.”

Independent fact-checks have disproven the long-running social media claim that Rapinoe “stomped” on the American flag after the women’s team’s 2019 World Cup win.

Team USA will compete against Australia in the bronze medal match on Thursday.