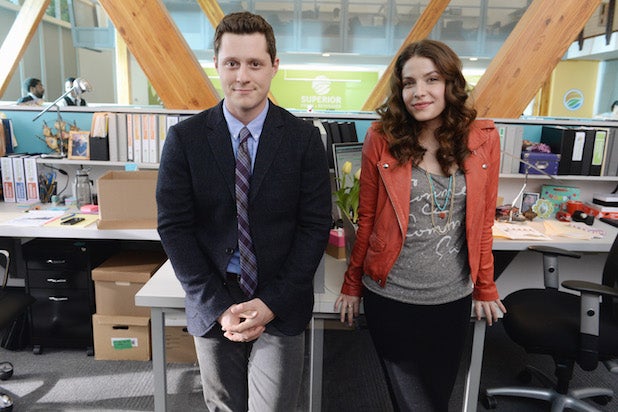 It’s tempting to compare the freshman comedy “Kevin from Work” to “How I Met Your Mother.”

Barbie Adler, a former “HIMYM” co-executive producer, created and wrote the new sitcom which debuts Wednesday on ABC Family. As a result, the two share a similar sensibility.

But where the now retired CBS series almost immediately benefited from Neil Patrick Harris’ name and breakout character and the thrill of romcom courtship, “Kevin from Work” is devoid of both a big name — unless you consider Amy Sedaris a big name — and a sticky enough premise to compel people to come back again and again.

That’s because much of the show is predicated on the “will they or won’t they” relationship between Kevin (Noah Reid, “Backpackers”) and his workplace crush Audrey (Paige Spara).

Deterred by their cubical camaraderie and Audrey’s muscle-head boyfriend, Kevin only builds up the nerve to tell Audrey how he feels when he thinks he’ll never see her again thanks to a new job in Italy.

Things get awkward, of course, when Kevin’s job falls through and he’s forced to return to his old job and the realization that the love he drunkenly professed in a letter to Audrey will make things uncomfortable. Kevin tries unsuccessfully to retrieve the note in the pilot. In the second episode, he deals with the fallout at work and at home.

As it turns out, Audrey is the most normal person in Kevin’s oddball life, which includes his gym-rat bestie Brian (Matt Murray, “Rookie Blue”), his narcissistic younger sister Roxie (Jordan Hinson), his gossip-loving coworker Ricky (Jason Rogel, “Impastor”) and his sex-crazed boss Julia (Sedaris). When Kevin goes after the letter, he accidentally adds Audrey’s roommate Patti (Punam Patel) to the mix and she becomes his mostly friendly stalker.

And therein lies the rub. Kevin’s world and his limited but racially diverse interactions are too constrained for a single-camera comedy on basic cable. Instead, they feel more like the seat-of-the-pants antics found on web series such as “Chloe and Zoe” and “The Misadventures of Awkward Black Girl.”

On one hand, the microscopic nature of “Kevin from Work” is fresh and daring in a millennial-friendly sort of way as are Reid and Spara’s attractive visages and tangible chemistry. On the other hand, the webby approach and the caricature heavy supporting cast erode the show’s legitimacy.

Nowhere is this more apparent than in Murray’s performance. A grating cross between Joe Piscopo and Eddie Murphy, Murray’s Brian is too much and too frequent. Thankfully, the same can’t be said for Sedaris, who as per usual, makes the most out of the few scenes she has. Rogel and Patel also get stronger by the second installment and could turn out to be quite the show stealers.

In order for “Kevin from Work” to work and to advance beyond its 10-episode first season, there needs to be more Sedaris, fewer over-the-top portrayals and enough romantic tension to woo viewers. A catchphrase like “suit up” couldn’t hurt either.