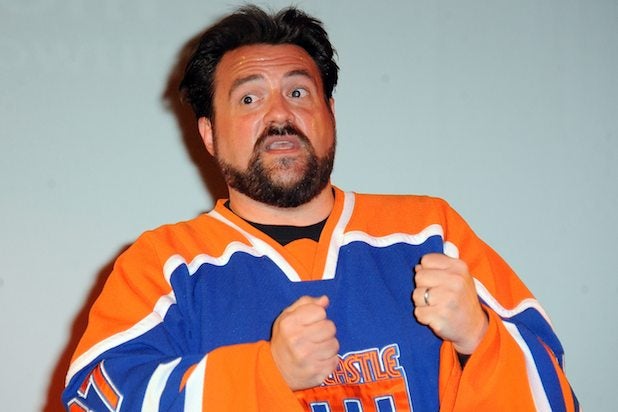 “Batman vs. Superman” stars Ben Affleck as a brand new Batman, and like every other incarnation of the DC superhero, he’ll be wearing a brand new suit. And according to self-professed superfan Kevin Smith, it’s awesome.

The filmmaker and “Comic Book Men” star told KROQ personality Ralph Garmen during their weekly live podcast, “Hollywood Babble-On,” that director Zack Snyder had shown him a picture of Affleck in costume backstage at a Q&A event over the weekend promoting the Blu-ray release of “Man of Steel.”

“I saw the Batman costume. More than that, I saw a picture of him in the costume,” Smith said. “Now I don’t want to give anything away, because that’s up to them and stuff, but I’m going to say this — I instantly bear hugged him. You have not seen this costume, in a movie, on film before. And for a comic book fan, it was mind bending.”

Blogs around the web have been speculating that the influence for the new costume design hails from Lee Bermejo’s 2011 graphic novel “Batman: Noël,” which is based on Charles Dickens’ “A Christmas Carol.”

Smith, who was commissioned by Warner Bros. in the mid ’90s to write a “Superman” movie that never got made, did not address those rumors. He did, however, make sure to emphasize that Snyder and his producing team are not making the same mistake prominently featured on George Clooney‘s suit in “Batman & Robin.”

“Everyone always does this “Matrix”-y/”X-Men” black thing,” Smith said. “There wasn’t a single nipple on this fuckin’ suit, man. It was fantastic.”

See video: ‘Batman Vs. Superman': Watch Gotham and Metropolis Duke It Out on the Football Field

Affleck has previously said that Snyder’s “brilliant” approach to the character after the success of Christopher Nolan’s critically-acclaimed “Dark Knight” trilogy is what made him sign on for the film.

“Zack had this incredible take on it,” Affleck told Jimmy Fallon in September. “Obviously you can’t do what Christian [Bale] did — those movies are awesome, amazing — so he wants to do something different, but still in keeping with that. So I thought, ‘This is a brilliant way to do this, I really know how to hook into this.'”

“I’m already, obviously, a flag waiver for the movie, but the costume blew my mind,” Smith added. “I’m so fucking happy, I think everyone is going to be like, ‘Holy shit.’ It’s its own thing. We haven’t been down this path at all.”