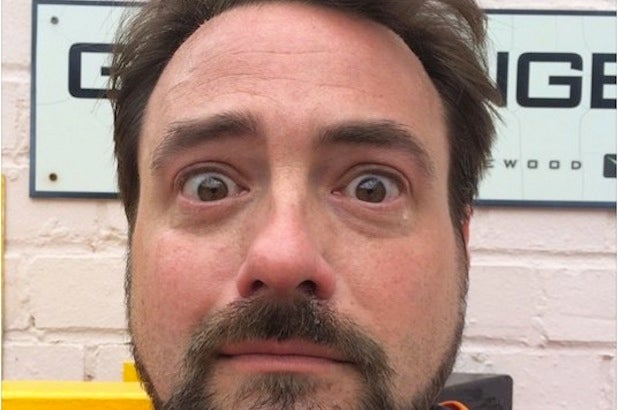 Kevin Smith has been to the set of “Star Wars: Episode VII” at Pinewood Studios in England, and what he saw has blown him away.

The “Clerks” director, whose next film is a horror called “Tusk,” opened up about a set visit — that resulted in a teary-eyed Instagram picture (above) last week — while speaking at the Neuchatel International Film Festival in Switzerland.

Smith described the visit as a “f–king magical” experience that delighted his inner child because the production wasn’t reliant on CGI and had plenty of familiar faces roaming around.

“What I saw, I absolutely loved. It was tactile — it was real. It wasn’t a series of f–king green screens and blue screens in which later a bunch of digital characters would be added. IT was there, it was happening,” Smith said. “I saw old friends who I haven’t seen since my childhood, who aren’t really friends, but I love them more than some of my f–king relatives. I saw uniforms, I saw artillery I haven’t seen since I was a kid. I saw them shooting an actual sequence in a set that was real. I walked across the set, there were explosions. And it looked like a shot right out of a ‘Star Wars’ movie.”

The real magic — that Smith says was “missing” from George Lucas‘ prequels — flowed through Smith’s body when he stepped foot on the Millennium Falcon.

“As I walked up that ramp I realized that the something that was missing from those other movies, and it’s now in these movies,” Smith continued. “He’s building a tactile world, a world you can touch. And he’s replicating with all the love of someone who has the world’s greatest collection of ‘Star Wars’ figures.

“It’s like the field of dreams, the Kevin Costner movie,” Smith added. “And if J.J. builds it, we’re all going to come hard, because it’s amazing. It looks fantastic. So anyone out there wondering if he’s going to pull it off, he’s pulling it off. He showed me cut scenes, he showed me sequences, images, pictures. I cried and I hugged that guy. And I’m sure as I was crying and hugging on him that he was thinking, ‘time is money’ because they’re making a movie. But he got it. He was very flattered. And I was like, ‘Honestly dude, you’re doing it. You’re making my childhood again.  You’re doing our ‘Star Wars.” What I saw, blew me away.”