Netflix and creator Kevin Smith shared the first teaser for their highly anticipated “Masters of the Universe” series on Thursday.

After a cataclysmic battle between He-Man and Skeletor, Eternia is fractured and the Guardians of Grayskull are scattered. And after decades of secrets tore them apart, it’s up to Teela to reunite the broken band of heroes, and solve the mystery of the missing Sword of Power in a race against time to restore Eternia and prevent the end of the universe.

The new teaser, set to Bonnie Tyler’s “I Need a Hero,” was released during a preview of the series for Netflix’s “Geeked Week.” Netflix also revealed that the first set of five episodes — set to drop on Friday, July 23 — will be accompanied by the 25-minute aftershow “Revelations: The Masters of the Universe Revelation Aftershow,” hosted by Smith. 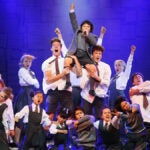 The star-studded cast for “Masters of the Universe: Revelation” includes Mark Hamill as Skeletor, Lena Headey as Evil-Lyn, Chris Wood as Prince Adam / He-Man and Sarah Michelle Gellar as Teela.