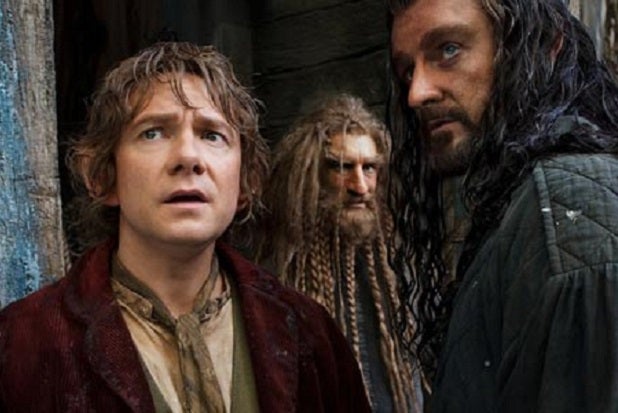 Moviegoers have turned “The Hobbit” into a holiday habit, but they’ll have to find an alternative next year and so will Warner Bros., the studio behind the blockbuster franchise.

That’s because “The Hobbit: The Battle of the Five Armies,” which steamrolled to its third straight box office win this weekend, is the finale in Peter Jackson’s latest trilogy, which followed his earlier blockbuster “Lord of the Rings” series.

“Five Armies” is sending the series out in style, having taken in $220 million domestically in 19 days and and is on pace to beat the box-office haul of the two earlier movies.

All six of “The Hobbit” and “Rings” movies opened a week before Christmas, shot to No. 1 and stayed there for three weeks, an unprecedented box-office feat.

“There are James Bond movies in November and Marvel kicks off summer, but I’ve never seen a franchise so tied to a particular time and date,” said Paul Dergarabedian, senior media analysts at Rentrak. “We’ve become so accustomed and familiar with these movies that for a lot of people, December has been ‘Hobbit’ time.”

All told, in the three “Rings” films and three “Hobbit” tales, Bilbo Baggins, Gandalf and the gang have grossed more than $5.6 billion for Warner Bros. since the release of “The Fellowship of the Rings” in 2001.

No tears are necessary. The studio has “Harry Potter” author J.K. Rowlings’ “Fantastic Beasts and Where to Find Them” in the works, along with its DC Comics films such as “Batman v. Superman: Dawn of Justice” and a series spun from “The Lego Movie.” But they all arrive in 2016, so what about next year?

“We’re still working on it,” he admitted. Movie fans may not feel the void as much as the studio next year, since Disney will be filling the pre-Christmas slot with “Star Wars: The Force Awakens.”

There are reasons for the huge holiday success of the epics inspired by J.R.R. Tolkien fantasy adventure books.

“First and maybe foremost, they’re a lot of fun,” Goldstein said. “There’s serious brand equity in Middle-earth, Peter Jackson delivers great stories, and the way he tells them provides a great experience for his core fans and broad audiences.”

That appeal translates very well in other countries.

“The Hobbit: The Battle of the Five Armies” is heading for $1 billion at the worldwide box office, fueled primarily by the $502 million it’s taken in abroad, with a Jan. 23 China run yet to come.

Foreign returns have so far made up roughly 70 percent of the nearly $750 million worldwide box-office haul for New Line and MGM’s “Five Armies,” a ratio in line with Jackson’s other epics.

“Working with Peter, Fran Walsh, Philippa Boyens and the entire ‘Hobbit’ team has been an amazing experience,” said Veronika Kwan, president of international distribution at Warner Bros.. “It has been a joy and a privilege being involved with the films, and it has felt like being a part of a big family.”