In a Monday appearance on CNN’s “New Day,” Katie Lane told anchor John Berman that her father “wasn’t by any means far-right” and consumed media across the political spectrum, but was hesitant to get vaccinated before the Food and Drug Administration approved any of the shots.

Her brother, Evan Lane, reiterated that, saying their father “wasn’t anti-vaccine,” and was “just hesitant.” 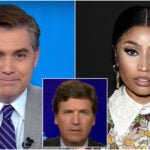 “He watched some Tucker Carlson videos on YouTube, and some of those videos involved some misinformation about vaccines, and I believe that that played a role,” said Katie, who previously said the same thing to a local station in Washington, telling that outlet her father was “a victim of misinformation.”

Carlson, who hosts the top-rated program in cable news, has been a frequent target of critique who believe his “just asking questions” approach to vaccine coverage has contributed to hesitancy among right-leaning Americans to get the jab.