The “Kids in the Hall” cast — Dave Foley, Bruce McCulloch, Kevin McDonald, Mark McKinney and Scott Thompson — are unearthed from their burial plot and set loose on the world once again in the first trailer for the Prime Video revival of the beloved sketch comedy. The reboot will debut on May 13, the streamer announced on Wednesday at its Prime Video Presents Canada showcase event in Toronto.

Things are crushed from a distance, tasteless jokes are made and Queen Elizabeth spoofed in the trailer, which sees the comedians skeptical of their new streaming network, Amazon.

The original Emmy-nominated sketch show premiered in 1989 and become a cult comedy hit. “What an amazing gift to put on our old wigs, and even get some new ones,” the comedy troupe said in a joint statement.

“Hugely influential and envelope-pushing, ‘The Kids in the Hall’ returns without missing a beat. The new sketches capture the energy and magic of the original series, and are a true testament to what made the group so successful in the first place,” Christina Wayne, head of Originals Canada at Amazon Studios, said in a statement. “We are thrilled to bring ‘The Kids’ back for their fans to enjoy and introduce them to new audiences around the world on May 13.” 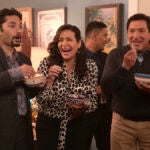 Also Read:
‘With Love’ Renewed for Season 2 by Amazon Studios

A week after the revival series drops, “The Kids in the Hall: Comedy Punks,” a two-part documentary produced by Blue Ant Studios, which recently premiered at SXSW, launches on May 20.