Jimmy Kimmel had a surprise guest during his monologue on Thursday’s episode of “Jimmy Kimmel Live”: California Gov. Gavin Newsom, who showed up to explain the state’s new vaccine lotto — and, we guess, to get some fun publicity amid the recall effort.

In case you hadn’t heard, Newsom announced a new vaccine incentive program on Thursday worth $116 million. That includes $50 prepaid grocery store gift cards for the next 2 million people who get vaccinated, with the leftover money — $16.5 million — to be split between 10 winners. And yes, eligibility is retroactive: Even Californians who have already been vaccinated are eligible for the prizes, which will be announced June 15.

Early on in Kimmel’s monologue, he explained that he’s largely been doing in-studio shows in front of his staff, but “to liven things up, we’ve been inviting one or two vaccinated people per week to sit in our audience. And tonight we are joined by, uh, what is your name, sir?” 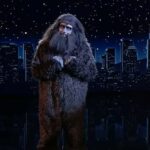 Also Read:
Kimmel Has Bigfoot on to Beg QAnon to Care About Other Conspiracy Theories (Video)

Yes, the man’s name was “Gavin,” and the bit then became a joke about how Kimmel had no idea who he was.

“What do you do for a living, Gavin?” Kimmel asked.

“I hate to admit this, I’m in politics, Jimmy,” Newsom said.

“Oh really, what do you do in politics?” Kimmel replied.

You get the gist. The banter continued for a few moments, until Kimmel said, “So you might know something about this new lottery,” at which point Newsom explained all the stuff we broke down at the top of this article. And of course, Kimmel had to ask some weird follow-up questions.

“What if you got vaccinated under the name Carlos Danger, would you still be?” Kimmel asked, referring to the humiliating pseudonym used by disgraced former congressman Anthony Weiner. 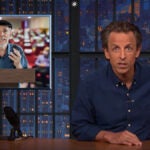 “Jimmy, I have no idea what you’re asking,” Newsom joked.

The governor then said he is not personally eligible for the lottery, but made it clear that Kimmel is, joking, “You need the money.”

“How mad would everyone be if I won,” Kimmel replied.

Watch the whole monologue above; the Newsom bit happens right at the beginning.