With the emergence of the new Omicron COVID variant making headlines, “Jimmy Kimmel Live” host Jimmy Kimmel wanted to make one thing very clear during his Monday monologue — it’s definitely not a political maneuver for Democrats, as Texas Congressman Ronny Jackson suggested. And that’s simply because they aren’t united enough for that idea.

On Saturday, Jackson — a former White House doctor — tweeted out his assertion that the Omicron variant was created by Democrats in an effort to have midterm elections reliant on mail-in voting.

“Here comes the MEV – the Midterm Election Variant!” Jackson wrote. “They NEED a reason to push unsolicited nationwide mail-in ballots. Democrats will do anything to CHEAT during an election – but we’re not going to let them!”

At that, Kimmel scoffed and pointed out how divided the Democratic party has been on major issues lately.

“All right, let me get this straight, Dr. Ronny. Chuck Schumer and Nancy Pelosi developed this variant to encourage Democrats to vote by mail, is that how it [went]?” Kimmel said. “Seems like maybe you’re giving them too much credit. You think Democrats are that organized? They can’t even get Joe Manchin to support maternity leave, I don’t think they’re creating viruses.”

Kimmel noted at the beginning of his bit that Omicron has yet to be officially found in the U.S. yet, but at this point, “it’s like ‘Where in the World is COVID San Diego?'” 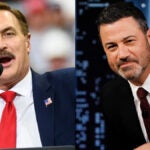 The late night host also marveled at the fact that Jackson, a medical professional, is touting this “crazy” conspiracy.

“This man was a White House doctor!” Kimmel said. “This is a man who had Obama and Trump’s testicles in the palms of his hands! He’s just making up crazy stuff. That’s our world now.”

You can watch Kimmel’s full opening monologue in the video above. His comments on Ronny Jackson and the Omicron variant begin at roughly the 3:18 mark.