Don’t even try to take on the Cheesecake Factory. That’s the advice Jimmy Kimmel shared during his monologue on Wednesday night’s installment of “Jimmy Kimmel Live!” as he reacted to anti-vaccine mandate protesters rallying at a Queens outlet of the chain restaurant earlier this week.

The sit-in, Kimmel explained, was staged by an “angry group” protesting an order requiring patrons to show proof of vaccination to get into bars and restaurants in New York and various other locales. Additionally, a new mask mandate just went into effect. The incident resulted in six arrests, and Kimmel went on to show social media footage from protesters, including one who said, “We’re gonna shut down Cheesecake Factory. … Shut it down.” 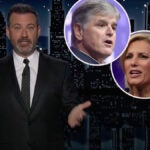 And that was Kimmel’s comedy take off point.

“Let me tell you something, lady: You will never shut down the Cheesecake Factory. This is not an ordinary restaurant. They don’t mess around. Their menu is 500 pages long, OK?” Kimmel said to laughs. “You think you can out hustle a company that offers crispy crab wontons and cheeseburger spring rolls? That factory will be cranking out cheesecake until long after you and I are dead — may even be the reason you and I are dead.”

He added: “I know we call them anti-vaxxers, but I get the sense there are other issues at play there as well.”

You can watch this portion of Kimmel’s monologue at around the 3 minute mark in the video above. 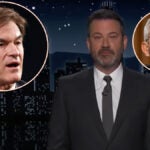