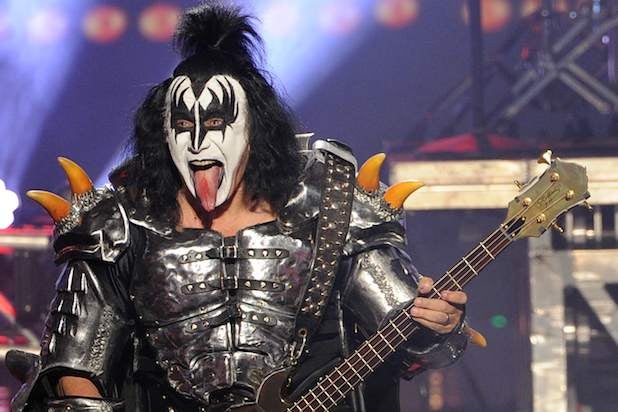 KISS bassist Gene Simmons is coming under fire for telling depressed people to kill themselves in an interview that was published online at the end of July.

“My mother was in a concentration camp in Nazi Germany. I don’t want to hear fuck all about ‘the world as a harsh place.’ She gets up every day, smells the roses and loves life,” Simmons told SongFacts.com. “And for a putz, 20-year-old kid to say, ‘I’m depressed, I live in Seattle.’ Fuck you, then kill yourself.”

Australia’s Triple M radio network reacted on Friday by banning KISS songs across the country, and has challenged America to do the same.

“Triple M Network can’t and won’t be playing or supporting this dickhead’s music,” Mike Fitzpatrick, Triple M’s head of content, said in a statement. “I put the challenge out to other stations across Australia and North America to also drop any of this nudnik’s songs until such time as he reconsiders his thoughtless and insensitive position.”

Motley Crue bassist and radio host Nikki Sixx caught wind of the interview earlier this week, and scolded Simmons on the air and on Twitter.

“There is a 20-year-old kid out there who is a Kiss fan and reads this and goes, ‘You know what? He’s right. I should just kill myself,'” Sixx told his listeners.

I struggled with addiction and depression but found recovery.Would you be happy if I killed myself instead?Also my 4 kids wouldnt been born.

I wonder if @genesimmons would still say how depressed people or addicts should kill themselves if it happend to his wife or kids?

Simmons began talking about depression that can accompany drug and alcohol abuse when addressing his relationship status with the “original” KISS members. It’s not healthy.

“No, I don’t get along with anybody who’s a drug addict and has a dark cloud over their head and sees themselves as a victim,” Simmons said. “Drug addicts and alcoholics are always: ‘The world is a harsh place.'”

While promoting his new AMC show “4th and Loud,” a reality series chronicling the inaugural season of the LA Kiss arena football team, Simmons took shots at former band members Ace Frehley and Peter Criss, both whom have been open about their struggles with addiction.

“Why would you dump your best friend who became a crackhead and a loser?” he asked himself on stage at the 2014 Television Critics Association summer press tour. “We love and respect those guys for what they did at the outset of the band, and they succumbed to the cliches of cliches, which is drugs and alcohol. Are you kidding me? If you’re going to pass the ball to your teammate and they can’t see where the goal is, they’ve got to leave.”

The delayed outrage over Simmons’ comments can most likely be attributed to Robin Williams’ death, which put suicide, depression and addiction at the forefront of the cultural mindset at the start of the week.

Williams, an Oscar-winning actor and comedian, was found dead in his Bay area home on Monday with a belt secured around his neck. The coroner investigating the death has ruled that the 63-year-old entertainer died due to asphyxia.

Also read: Robin Williams to Live On as Character in ‘World of Warcraft’ Virtual World

Simmons further encouraged suicide during his controversial rant when he added: “I’m the guy who says ‘Jump!’ when there’s a guy on top of a building who says, ‘That’s it, I can’t take it anymore, I’m going to jump.’ Are you kidding? Why are you announcing it? Shut the fuck up, have some dignity and jump! You’ve got the crowd.”