A version of this interview with “Klondike” director Maryna Er Gorbach originally appeared in the International Film issue of TheWrap’s awards magazine.

Maryna Er Gorbach was living in Istanbul in 2014 when Russia annexed Crimea and a Malaysian Airlines passenger flight was shot down by pro-Russian separatists over Ukraine. She turned those events into the backdrop of a drama about a pregnant woman in a brutal environment — a drama with premonitions of the state of Ukraine today.

The film is Ukraine’s entry in the Oscars Best International Feature Film category.

Why go back to the events of 2014 for this film?
I started to write in 2016. I think it took me one year to have a draft written, but I had been thinking since 2014. It made me ask myself that if this international air crash catastrophe is not told, and criminals are not punished, then what about occupation? What about the annexation of Crimea? And basically, where is the voice of locals? I was thinking about the local people who are living under occupation — who will care about them?

Where were you living when the annexation took place and the plane was shot down?
I was in Odessa with my family and my baby. It was not very close, but it was a claustrophobic feeling that is very similar to what we are going through right now. And the media is working on our fears. Sometimes I say to my husband, “I want to take one flower and zoom in on it.” And that’s what happened with “Klondike.” I was trying to zoom in on nature and tell about a simple local family and their very simple problems — daily life during war. And I wanted to ask questions to an international audience: What do they think is happening there? Is it a local conflict? Is it occupation? Is it war? 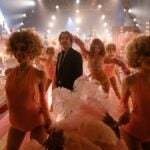 For the first time, I decided not to complicate things. I just gave up my fears and I said I don’t want to show this feeling that Russia is a huge country with thousands of rockets, and one day all of them will destroy Ukraine. That was killing my soul. So the key for me was to fight this idea that we are a small country, we have a huge neighbor and they will kill us. I decided that I know people in Ukraine, I know they’re strong and I want to tell about a normal family.

There are some extraordinary long takes in the film, including one near the end of the movie when the woman (Oxana Cherkashyna) is having a baby as the pro-Russian separatists are walking in and out of the room, ignoring her and taking whatever they want. Was that a difficult scene to shoot emotionally or physically?
Well, it’s very good question. I started to write “Klondike” from that final scene. It was the first scene, and I knew that I had to get to that, because that was my feeling about Ukraine in 2014 and 2016 and ’17. It’s war against nature. So let’s try to come to this message that human instincts and the power of nature, which is represented by the woman’s body, are stronger than war.

That scene was one of the last shooting days. Technically, it was very easy because we knew how to do it. And emotionally there were no problems, but it was a scene of big trust with the actress. She has to disappear, to trust her body and her emotional instincts. I watched on my monitor, and then I took my monitor away and went to watch it one more time. And the next day I came to her and hugged her and thanked her for her trust.

What were the biggest challenges in making the film?
You are asking me now, at the end of the 2022. If you asked me last year, I maybe would say to you that coronavirus is the problem, you know? But the real challenge, I think, is to stay independent. Whatever we make with this film, we have some principles. We are fighting for them. We made this film to very carefully ask international audience: ‘What do you think about the situation on the border of Russia and Ukraine?’ And then suddenly, after the 24th of February (when Russia invaded Ukraine), we became like a backstage movie of all that news.

Watching the film now, given the situation in Ukraine eight years after these events, I was particularly struck by the moment when one character says to another, “This war won’t be over until all your enemies are dead.”
That sentence is true. Yeah. I was trying to be very honest.