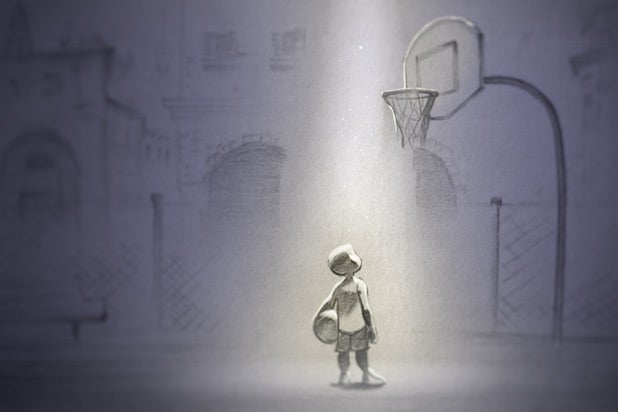 He’s already made a huge impact on Hollywood as the leader of the town’s favorite sports team, but Kobe Bryant says he’s just getting started.

Next up: movies, TV, short films, even novels. “I think there’s a myriad of ways to reach an audience, and the important thing is making sure we have compelling stories and characters that can support that,” the NBA legend told TheWrap on Sunday at the Tribeca Film Festival.

Bryant was at Tribeca to premiere the short film “Dear Basketball,” a collaboration with Disney animation legend Glen Keane.

The six-minute, hand-drawn short is based on a poem Bryant wrote in November 2015 and published on the Players’ Tribune website to announce his retirement from basketball. Keane, who left Disney after a 40-year career included designing and animating such iconic characters as Ariel in “The Little Mermaid,” the genie in “Aladdin” and the Beast in “Beauty and the Beast,” depicts Bryant as a child and as an NBA superstar, as Kobe’s voiceover explains what drove him and why it was time to end his playing days.

Bryant and Keane sat down with TheWrap to discuss the next phase in two legendary careers.

How did this turn from a poem on the Player’s Tribune website into a film?
KOBE BRYANT: I’ve had the idea of making it a short since I first started writing it. I knew filmmaking was where I wanted to go, and the dream was to have John Williams score it and Glen Keane animate it.

And you were already thinking movie?
BRYANT: Oh yeah, oh yeah, oh yeah. Because I felt like, if I was a kid growing up and Michael Jordan had a project like this, it would have helped me tremendously to learn from his dream. I thought, “OK, I’m retiring from the game, but how can I give something back to the game for the next generation?”

Glen, how did you get involved? Did you guys know each other before?
GLEN KEANE: No, it was really just through Kobe seeing some of my work beforehand…

Well, yeah. You’ve got kids.
BRYANT: Oh god, I knew him before I had kids.

KEANE: He called, and we could not believe Kobe was visiting us in our humble, tiny little studio in Hollywood. And Kobe walked in, and the first thing he says is, “Yes, this is perfect.”

BRYANT: [in a hushed voice] There were storyboards up on the walls, and it wasn’t computer generated, it was hand drawn. It was just like, oh my god.

KEANE: I was so happy to hear you say that. And so we just spent some time connecting. We found that creatively we had a lot in , even though I was in an entirely different field. We talked about Beethoven, and how in his head he was listening to Beethoven in…

BRYANT: Game 6, 2009 Western Conference Finals. [The Lakers beat the Denver Nuggets 119-92 to advance to the NBA finals, which they also won.]

KEANE: And I’ve had Beethoven in my head too. I mean, I was animating Beast’s transformation [in “Beauty and the Beast”] in my mind to Beethoven’s Ninth. So we really connected on an artistic level.

Kobe, I was at the John Williams tribute you attended last summer, and I was fascinated by the idea that you find ground between basketball and music or cinema. Have you always seen those kind of connections?
BRYANT: Oh yeah, absolutely. And it’s not just film — it’s nature as well. Once you know what it is in life that you want to do, then the world basically becomes your library. Everything you view, you can view from that perspective, which makes everything a learning asset for you.

And if that’s the case, then I can take a very specific film that’s focusing on basketball, and have that connect to human nature as a whole. Because it’s not necessarily about the discipline, but it’s about how the discipline is achieved, and why. And those things are the same no matter what area you’ve in.

Glen, you had Kobe’s words to start with, but how did the collaboration work from there?
KEANE: We had a lot of conversations about the spirit of it. It was going to be a way of communicating, from a child’s point of view, how Kobe followed that path. It was very much a nostalgic look back, but with a purpose of giving the tools to other kids, anybody, how do they achieve that dream.

One of the first things we did was download Kobe’s 20 top plays on YouTube. And we stop-framed through that. It was so cool. I mean, he’s got a photographic memory of every moment on the court.

I remember one particular shot. I forget which game it was, but it was the last second and you’re going laterally across and you’re shooting a three-point shot. It was impossible, but you made it. And you explained, “Well, the way I did that was from when I was a kid … “

BRYANT: Riding a bicycle. Right. The shot was against the Miami Heat at the Staples Center, and I shot a one-legged runner going sideways. I was going this way and I shot it back that way. I told him I learned how to do that as a kid — we used to have these competitions on BMX bikes, where you take these little stones and you have to hit the telephone pole. But if you’re riding the bike, you can’t aim it straight at the telephone pole. You’ve got to throw it back a little bit to offset the direction in which you’re going. That’s how I learned to do that fadeaway, because if I’m going this way and I aim for the basket, it’s gonna go left. If I aim it back a little bit, it balances itself out.

KEANE: It was so cool. ‘Cause I realized how much the physics plays into all of this. As an animator, you can’t just animate Kobe. You don’t have the skill, you don’t have the knowledge. I had to study Kobe, which was so much fun.

I studied this, and I animated it — Kobe kicks his legs and throws his hips and moves laterally in the air, and changes the ball and comes from the other side and sinks it … I mean, I get chills right now just thinking about it.

BRYANT: [laughs] Now, see, after watching Glen animate those moves frame by frame, now I realize why my shoulder and why my back and everything hurts so darn much. Oh, that’s why. It makes sense now. When you’re doing it, you just do it.

Do you want to have a presence in the entertainment industry now?
BRYANT: What I like to do is what we call it creative education. How can we inspire the next generation of athletes? And I use that term in a very broad way. If you have a body, you’re an athlete. How can we inspire them to be the best version of themselves?

With kids sometimes, it’s tricky. Because you can’t say, “Do this, do that, work hard.” They know that. But if we can show them a story of what this person did, what this character did, what this character went through, and if they in turn see themselves in that character, then it becomes a process that they own themselves. It’s not somebody else telling them what to do, they see it. If we can influence the next generation in that way, then we’ve been successful.

And you want to do that through film…
BRYANT: Oh yeah. Through films, shorts, TV, long-form, live-action one day. Novels. I think there’s just a myriad of ways to reach an audience, the important thing is making sure we have compelling stories and compelling characters that can support that.

You were famously driven in your basketball career. Are you more relaxed now?
BRYANT: Well, it’s not as outwardly intense. Basketball is such an emotional thing, And this process is different. You have time to execute and make sure it’s as good as we can make it. In basketball, you don’t have that. The game’s at 7:30 Monday night, and if you’re not ready, you’re not ready. Oh well.

It’s a different kind of intensity.

Can the legacies you guys already have be a burden? Glen, you sit down to animate this six-minute short as the guy who designed some of the most iconic figures in Disney animation history …
KEANE: I left Disney after about 40 years that there was something new calling to me, but it wasn’t going to happen unless I left. It was really hard to just leave, but there is a point of necessary ending.

I had no idea that this is what was waiting for me – but really, “Dear Basketball” is the first film where you actually see my drawings on the screen. All the Disney films, somebody else traced over those, painted on them… These are the raw drawings.

I keep saying to my wife, “I feel like I’m 20 years old again, and I’m just starting.” And she says, “You make me very uncomfortable when you say that.” But it’s a new start for me.

Kobe, does it feel like a new start for you?
BRYANT: Yeah. It’s kind of an evolution. The industry’s changed, but the mentality, the approach has remained the same. The lessons that I’ve learned remain the same. I’m just kind of pushing them out in a different way.