Steve Kornacki will soon be fully focused on a topic perhaps even more American than presidential elections: NFL football.

His new deal with NBC keeps him not only at NBC News and MSNBC, where he shone on Election Night 2020 and through the following days, but appearing on “Football Night in America,” “Sunday Night Football” and the 2022 Super Bowl telecast. 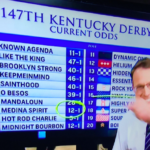 Kornacki, who correctly picked Medina Spirit to win the Kentucky Derby, has a mind for data and and numbers, so football is a natural fit – and he’s appeared on “SNF” since the election – but he’ll also be covering the Olympic Games and Triple Crown horse racing.

Kornacki picked Medina Spirit at 12-to-1 odds to win on NBC’s prerace show. He even put his money where his mouth is, placing a $100 bet on his prediction, which, at those odds, would’ve netted him $1,200. (Medina Spirit later failed a postrace drug test after testing positive for banned performance-enhancing substances. An investigation is ongoing and pending the results, Medina Spirit could become only the third horse in Kentucky Derby history to be disqualified and stripped of the title and winnings.)