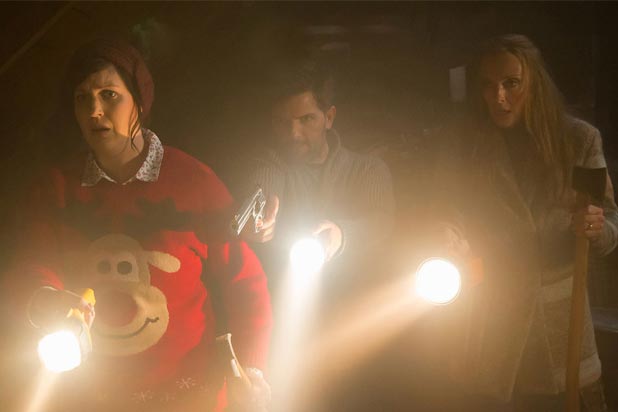 Legendary Entertainment CEO Thomas Tull is betting big on virtual reality, but don’t count on his movies showing up in a headset.

“There are some in the industry that see [VR] as another revenue stream,” he said Tuesday at the Business Insider Ignition conference in New York. “The least compelling thing I see as a consumer is to watch a two-hour movie in VR.” So don’t go looking for a virtual version of Legendary movies like its new Christmas horror film “Krampus.”

Virtual reality is an immersive form of entertainment that uses a high-tech headset to make viewers feel like they’re in another place in the middle of the action.

With deep-pocketed giants like Facebook putting their weight behind the technology and consumer headsets making VR more accessible, the emerging format has the potential to blur the definitions between videos and video games.

Tull, who has built a VR lab at Legendary’s headquarters, has taken a stake in virtual and augmented reality with early investments in Oculus, the VR headset maker later acquired by Facebook for $2 billion, as well as Magic Leap, a augmented reality start-up building a wearable device that overlays content on top of what users see in the actual world around them.

Tull acknowledged that VR has a poor track record in terms of consumer appeal, but he said that the sophistication of the technology and sheer level of money being poured into the format by the likes of Facebook suggest that VR may finally become mainstream.

Jim Breyer, the founder and manager of Legendary investor Breyer Capital, predicted that in the five to seven years, VR will have tens of millions of active engaged users.

In addition to VR, Tull’s tech bets include analytics, which Legendary has used to reduce its advertising expenses by 15 percent. “We’re spending as much money to tell an 80-year-old woman about ‘The Dark Knight’ as a [teen boy] in a Batman T-shirt,” he said. He said that using analytics to target potential audience members with a new show helps cut through the noise of a crowded television marketplace today.

He said other companies have approached Legendary to license its analytics tools, without specifying the suitors.