Laika’s animated film “Kubo and the Two Strings” has picked up some of the most positive reviews of the year, winning near-unanimous praise for the way it has crafted an epic adventure in the stop-motion format.

But there’s one area in which “Kubo and the Two Strings” has raised eyebrows: its casting. Irish actor Art Parkinson, best known for playing Rickon Stark on “Game of Thrones,” plays the title character, a young boy on a journey to find magical armor once worn by his father. Charlize Theron and Matthew McConaughey play a fierce monkey and a dimwitted beetle-shaped warrior who aid him in his quest, while Ralph Fiennes and Rooney Mara are among his chief foes.

But the film is set in ancient Japan and none of those actors are Asian. So at a time when Hollywood is often criticized for using Caucasian actors in roles that were originally written as Asian, are director Travis Knight and Laika being insensitive?

“I think people can take issue with any number of choices that we make,” said Knight, who is also the company CEO and the son of Laika (and Nike) owner Phil Knight, in a recent interview at the company’s headquarters in Portland, Oregon.

“But in the end, I’m incredibly proud of this cast, I think they did beautiful work, and I think it’s a great story. And I hope that even if people have disagreements with what we did, they can realize that the film has a sincere humanist perspective that is trying to honor the beautiful art of a great culture.”

Knight went on to explain the company’s thinking in a lengthy answer that also addressed the way in which he views the company and its mission.

“I think that the considerations you have casting a live-action film are different than the considerations you have casting an animated film,” he said. “In a live action film, what an actor looks like is as important, if not more important, than what they sound like. Age, physical appearance, gender, racial or ethnic background – those can become character-defining qualities for an actor in a specific role.

“But in animation, the only tool that an actor has is their voice. And when you’re trying to show the full range of human expression using this one instrument, it leads you down weird paths. Because sometimes, brilliant actors that you think would be exceptional, when you just isolate their voice independent of everything else, it’s not their strongest skill.

“And so for us, while certainly background is absolutely a consideration, our prime consideration in casting is the ability of the actor to capture the emotion with their voice. When you look back at our films, we’ve often cast actors in weird roles who are nothing like what they are as people. For instance, when we did ‘The Boxtrolls,’ as our female lead we have a girl from Georgia [Elle Fanning] who plays a hoity-toity British aristocrat. We have a man of Asian descent [Ben Kingsley] playing a white, social-climbing pest exterminator. We have African-American comedian from the Bronx [Tracy Morgan] playing a white British thug. In this movie, we have a South African actress [Theron] playing a savage, sword-wielding snow monkey.”

In “Kubo,” he added, the filmmakers did cast a number of Asians in the roles of townspeople and other human characters (as opposed to monkeys, bugs and moon monsters). Voice actors in the film, which comes from an original story rather than a traditional folk tale or more recent book, include George Takei, Cary-Hiroyuki Tagawa, Ken Takemoto and Alpha Takahashi.

“I fully believe that representation and inclusion matters,” Knight said. “So when we were casting the film, it was important that most of our human characters are actually actors of Japanese ancestry. For other characters, the gods and the talking animals, that wasn’t the prime consideration.” 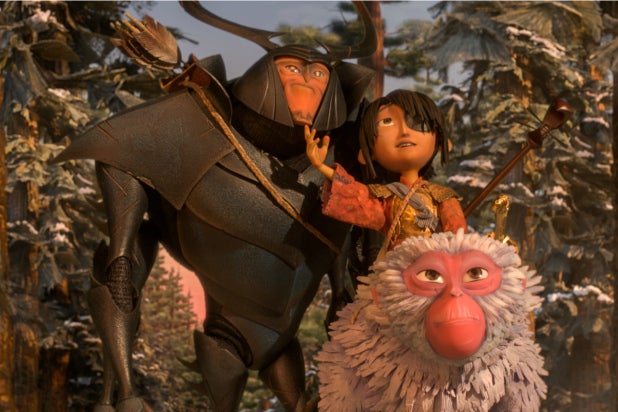 He added, “I can appreciate that people have differences of opinion on these things. And given the tenor of what’s going on in these times, the conversation is a meaningful one to have. But I also think that things can get easily simplified when you’re talking about diversity in a binary way. A lot of nuance gets lost when you reduce this complex matter to a hashtag.

“And from my perspective, when you look at diversity, it really is a combination of things — it’s the seen and the unseen characteristics and experiences that make us unique. So there’s race, there’s age, there’s physical appearance, there’s gender and any number of things that are readily apparent. And then there are the things you can’t see, like someone’s faith or gender identity. Those combinations of things are what make people unique, and all along the spectrum, that’s diversity.”

By staying away from the typical kinds of animated franchises, he said, Laika has tried to avoid the usual templates that can stifle diversity.

“What we’ve done all along is try to tell diverse stories,” he said. “When we first started on ‘Coraline’ 10 years ago, we thought we had all the ingredients to make an exceptional film — but when we were trying to find partners for the movie, nobody was interested. The refrain that we kept hearing was, ‘You can’t have a girl protagonist in an animated movie unless she’s a princess or a fairy.’ And that was mind-blowing for me as a father of a daughter, that you couldn’t have a normal girl as the lead in an animated film.

“The same thing with ‘ParaNorman’ — we had an openly gay character as one of the main characters in the move. I was incredibly proud when we got our GLAAD Media Award Nomination, but we also got threatened with boycotts, and people were lobbying the MPAA to give us a more restrictive rating.

“If you follow the prevailing orthodoxy, those films don’t get made. And I can give you a number of reasons why it’s the same with every film we’ve made, including ‘Kubo and the Two Strings.’

“So I think it’s a bigger issue. It’s telling more diverse stories with more diverse characters, and that’s what we’ve tried to do every step of the way. And our casting process is part of that. We’re basically colorblind in terms of how we cast our films, and I think you can see it when you look at the totality of our movies.”