This story about “Kubo and the Two Strings” first appeared in The Race Begins issue of TheWrap’s Oscar magazine.

The idea for “Kubo and the Two Strings” was simple, and it was ridiculously hard.

“The challenge I set for the team was to do a stop-motion David Lean film, a Kurosawian myth in miniature,” said Travis Knight, the director of film and the CEO of Laika, the Portland-based stop-motion animation studio that has scored Oscar nominations for “Coraline,” “ParaNorman” and “The Boxtrolls.”

“The idea of making a small-scale film look like a large-scale epic that’s shot on a sweeping, endless vista was kind of absurd on its face,” said Knight, who works with a staff composed of many who’ve been at Laika for a decade. “But we’ve got such a wide array of techniques — people who are creating technology and people who are doing things the way George Méliès was doing when he sent rockets to the moon. It’s that combination of craft and technology — we take the raw and the refined and we merge them.”

He shrugged. “That said, most people don’t care how it’s done. They just want to be entertained.”

Here, members of the “Kubo and the Two Strings” stop-motion team explain how they did it. 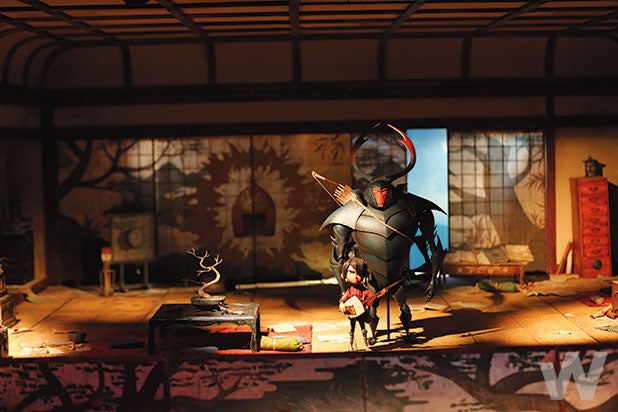 THE ART DIRECTION
As the story takes shape in a Laika film, so does the look. “Typically, we start with a kernel of inspiration to get our film off the ground,” said assistant art director Phil Brotherton. “For this one, we delved into lots of Japanese art, but we ended up settling on a block-print artist named Kiyoshi Saito [1907-1997]. He was trained in traditional Japanese block printing, but he took a lot of influences from European artists.”

Using that look as a jumping-off place, Laika’s art department — which consists of a model shop, a carpentry shop, a greens department and a parts department — began to experiment with paints and textures, and then to create locations.

“They look like nice little dollhouses,” said Brotherton of the “Kubo and the Two Strings” sets, “but they have to function for stop motion. They all have to sit roughly 42 inches high, so animators can walk up and reach the puppets. And they have to be modular and break apart, so we can get our cameras, our puppets and our animator where the action is taking place.”

The schedule is arranged by camera angle, and important sets can be used continuously for more than a year. 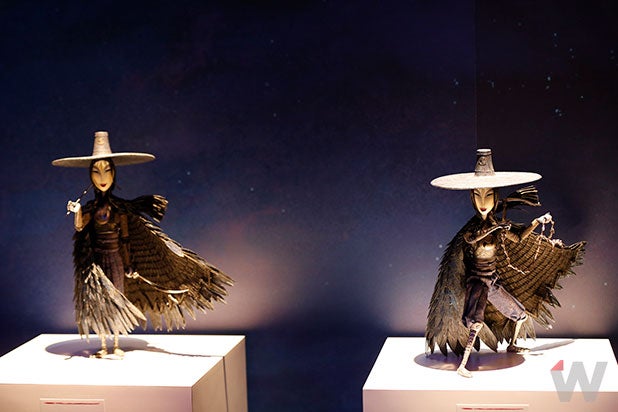 THE COSTUMES
Costume designer Deborah Cook researched fabrics and techniques to create a mixture of “an earlier, mythological era of Japan” with more modern looks. “We take wood blocks and weaves and origami and modern Japanese artists who are working with traditions, and take what they do apart to use elements of it to reflect the unique brilliance of their culture and history,” she said. (But it’s not all Japanese: The “Kubo and the Two Strings” grandfather character’s collar was borrowed from “The Day the Earth Stood Still.”)

The cloak of Rooney Mara’s evil spirit sisters, above, is made of 183 separate feathers, tiny laser-cut metal plates held in place with fishing wire and styrene. “The idea is to have elements of a samurai and elements of a bird,” she said, “but we have to make them stay still through every one of the 24 frames per second. It looks very fluid and flowing, but there’s a lot of engineering that goes into these costumes that’s well beyond anything you see in live action.” 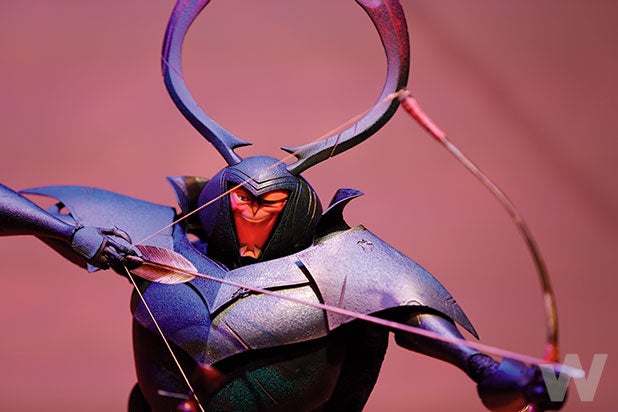 THE MODELS
A Laika team of about 65 builds the maquettes, all of which start with an armature (a model’s skeleton) that allows them to be posed. “For stop motion, it’s all about what’s inside the puppet and how it moves,” said Georgina Haines, creative supervisor of the puppet fabrication team.

For the beetle character voiced by Matthew McConaughey, above, the designers used a computer to help them map armature that contained between 30 and 40 different ball-and-socket joints, hinges and swivels (compared to 17 or 18 for human characters).

“The internal armature sits inside a very soft foam latex inner-body core,” said Haines. “Some of the external plates are joined to the armature through the foam, and some are just sliding plate-to-plate over the foam. So when you move him, you get a lot of the movement for free, without having to pose each plate.” 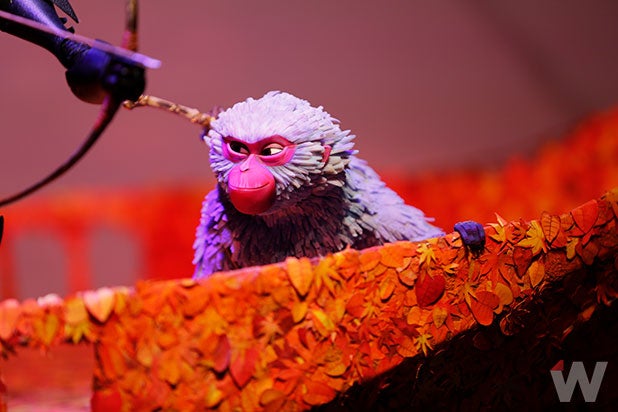 A monkey character voiced by Charlize Theron, above, was a particular challenge because of its fur. “We made her work from the inside out,” said Haines. A body of four-way stretch Lycra surrounds the armature, and that body was covered with silicone combed into fur fabric. Then additional lines of silicon fur were layered on top, “and our hair department foiled each line of fur and combed in a pigment.

“The idea was to give the feeling of the muscle squash and stretch that an animal would have, and the monkey-like movement that we wouldn’t have in our human characters.” 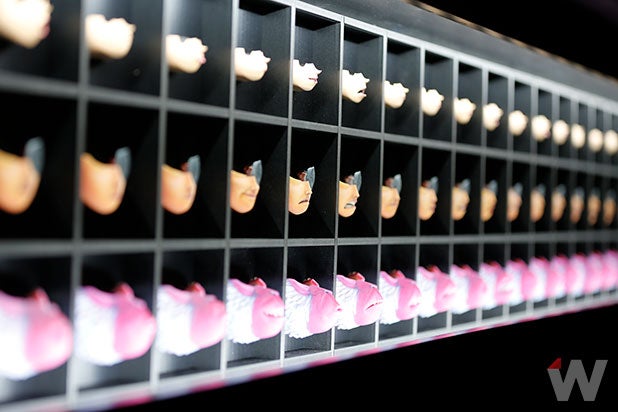 THE FACES
“There’s a lot of sophisticated engineering that goes on inside a character’s face that the audience never sees,” said Brian McLean, director of rapid prototyping at Laika. The department designs heads that allow the animators to minutely control facial expressions down to the eyelids — and then they use different techniques to produce facial expressions for all the characters.

For human characters, they use the same kind of 3D printing with powder paint on plastic that Laika started using on “ParaNorman.” But for Monkey, Beetle and the Moon Monster, three of the key characters in “Kubo and the Two Strings,” they worked with a color plastic printer still in beta testing, writing their own software to allow levels of sophistication never before attempted.

“A lead character like Kubo has 22,000 faces,” said McLean. “But we bisect the faces into two different phases, eyebrow and mouth, so the animator can independently replace one or the other. If you multiply the number of eyebrow expressions and the number of mouth expressions for Kubo, he has something ridiculous like 48 million possible facial expressions.” 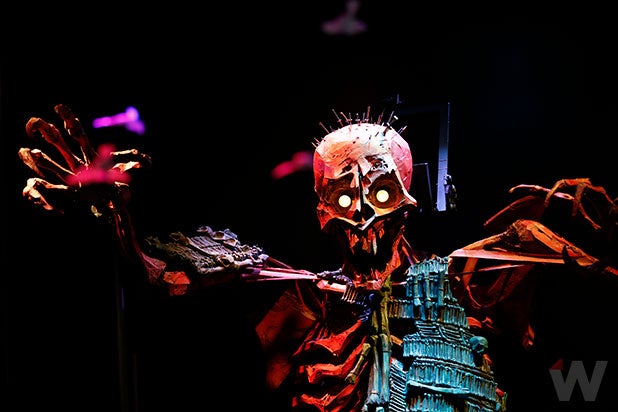 THE MONSTER
With a 22-foot “wingspan,” this giant skeleton is the biggest figure ever built for a stop-motion production, as well as one of the most complex. While a 3-foot version was used for many shots, the full-sized version was needed for scenes in which Kubo, Beetle and Monkey are all simultaneously fighting the monster, which sat on one hydraulic rig and had a second rig to control its head movements.

Jaw, finger, hand and arm movements were controlled by an animator, with the monster “essentially hanging from the ceiling,” production manager Dan Pascall said. “He’s a giant marionette puppet, really.”

The skeleton was made of dense foam, hollowed out to make room for its armature. With Kubo clambering on the skeleton’s head, Monkey in one of his hands and Beetle in the other, work was fiendishly complicated. “In a good week, we got about two seconds of footage,” said Pascall. “There was that much going on.”