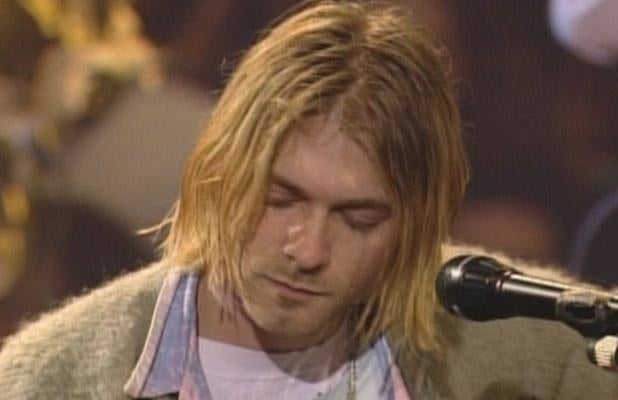 Saturday marks the 20th anniversary of the death of Nirvana frontman Kurt Cobain, who entertained millions and inspired countless more through his music.

To honor Cobain’s memory, TheWrap’s Steve Pond offers his five favorite Cobain performances, from “Love Buzz” in Detroit in 1991 to “Rape Me” in Paris in 1994.

Watch the videos to honor Cobain’s memory and witness his incredible talent.

The quality of the footage from this classic early gig at Saint Andrew’s Hall in Detroit in 1991 is rough, but so is the band – and the performance of the 1969 Shocking Blue song “Love Buzz,” which Nirvana released as its first single, was grunge before the word became a cliché.

There’s more than a little similarity between the guitar riff to Nirvana’s breakthrough hit “Smells Like Teen Spirit” and the slick ’70s rock band Boston’s smash “More Than a Feeling,” and Nirvana puckishly pointed that out at the 1992 Reading Festival by beginning “Teen Spirit” with a couple of choruses of the Boston song. Then they ripped through a gloriously ragged version of their own song, complete with light show and the most ramshackle guitar solo in the history of ramshackle guitar solos.

Nivana wanted to play its new song “Rape Me,” but MTV was adamant that the song wasn’t appopriate for the 1992 Video Music Awards. So they did “Lithium” instead – but not until Cobain used a few bars of “Rape Me” as the intro of the song, no doubt causing a few panic attacks in the control truck backstage.

Cobain had become a star, and was trying to grapple with a fame that he clearly found uncomfortable if not unbearable. Nirvana’s “MTV Unplugged” performance included some of the hits, but it was also full of covers that showed where they’d come from and, maybe, where they might go: three songs from the Arizona-based Meat Puppets, one from Leadbelly, and this David Bowie classic that Cobain managed to make sound confessional.

The Paris show from Nirvana’s final tour is considered to be one of the band’s best, taking place just two months before Cobain’s death. “Rape Me” was the final single released during Cobain’s lifetime (as a double A-side with “All Apologies”).