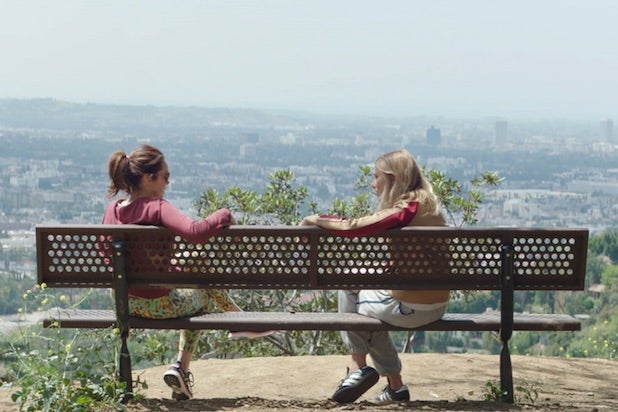 Courtesy of the Sundance Institute

The best place to see “L.A. Times” is unquestionably L.A. — more to the point, probably the Los Feliz or the Vista theaters over by the hipster enclaves of Silver Lake and vicinity. But it’s safe to say that a very good second option would be the Sundance Film Festival, where writer-director-actor Michelle Morgan’s comedy had its world premiere on Friday night.

“L.A. Times” is an indie rom-com for the 21st century, steeped in the trends and foibles of trendy Millennials who work in or around the entertainment industry. It’s a film made for audiences with personal experience negotiating Santa Monica Blvd. with or without Waze, finding the food truck of the week and living in a place where everybody you know is working on a script, or at least on an idea that might turn into a script someday, maybe, with financing from that rich Brazilian guy that their friend knows.

The Sundance audience at the Library Theatre on Friday contained a hefty helping of those people, but beyond that it was an indie-film audience for sure. And the audience relished tossed off lines like “we met at Bonaroo,” “my Uber driver and I have never been to Glassell Park,” and this exchange:

“I thought it was movie night. I thought we were going to watch ‘Tokyo Story.'”

Although there’s a hint of a Woody Allen homage in the opening credits, “L.A. Times” is made by and for the opposite coast from Woody’s urban tales. It’s an L.A. story, but for a generation that doesn’t automatically read its title as a newspaper reference. (For the record, the paper had nothing to do with this movie and isn’t even mentioned in it.)

“I wrote this movie because I love L.A., and I also hate it,” Morgan said at a post-screening Q&A. “The characters were inspired by real-life people, but the situations were kind of made up.”

The romantic comedy shifting between people in a large group of offbeat friends is of course a time-honored genre, and Morgan certainly isn’t out to subvert it or overhaul it. This is a gentle, genial update, consistently amusing and always likable; it may not break new ground, but it finds enough of new jokes, and Morgan’s obvious love of language gives it an extra charge.

(I mean, one of her characters unself-consciously uses the word eschew in the first few minutes of the movie, and gets away with it.)

The story centers on Annette and Elliott (Morgan and Jorma Taccone), a couple of writers; she’s mostly given up on writing, but he’s on a successful (if obviously schlocky) TV series full of mighty sword-wielding warriors glorying in their disembowelments. We follow Annette and Elliott through a breakup, while also dropping in on the lives of their friends: the girlfriend who sleeps with men too quickly (Dree Hemingway), the guy in love with his cousin (Kentucker Audley) and the TV star looking for women who aren’t too demanding (Adam Shapiro), among many others.

All the jokes at L.A.’s expense are pretty mild, but Morgan makes for a delightfully annoying leading lady (her character’s boyfriend says he fell for her after watching her complain at a restaurant). And she’s also a quirky enough director to not make the familiar tropes feel like rehashes.

She likes to shoot dialogue in single shots rather than using coverage, and she loves odd framing: putting characters in the corner of the frame, or shooting them to cut off their bodies and show lots of open space above them, or in one instance filming a phone conversation with the lead character’s face out of the shot, visible only in reflection on a glass coffee table.

These idiosyncrasies come across less as grand cinematic statements than as Morgan trying to have a little fun. But that makes perfect sense, because having fun is kind of the point here, and the Sundance audience did just that.

Now, they just need to hope that audiences out of Park City and west of the San Andreas Fault get the jokes.