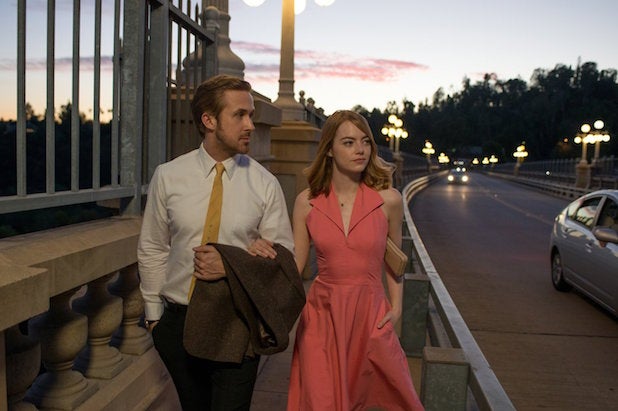 There was little doubt before Saturday night’s ceremony that Damien Chazelle’s musical was the front-runner to win at the Academy Awards. But there’s even less doubt now that the film has won with the PGA at the end of a politically-charged ceremony on Saturday at the Beverly Hilton.

The Producers Guild counts its final ballots using the preferential system, making it the only major guild to use the same system as the Oscars for its top award. In recent years, it has been by far the most reliable of the guilds in predicting Oscar success, and a win by “Moonlight,” “Manchester by the Sea,” “Hidden Figures” or any other contender would have been a huge blow to the widespread feeling that “La La Land” will coast to victory on Oscar night.

Instead, “La La Land” did just what it needed to do. And with timely speeches from producer Fred Berger and especially co-star John Legend, it even managed to cast itself as not just an escapist fantasy, but a movie for these politically charged times.

“I won’t pretend that ‘La La Land’ is a political movie,” said Legend when he introduced a clip from the film. “This is a film about love, about dreams, about this lovely city we call home, Los Angeles.

“Los Angeles is the home of so many immigrants, so many creative people, so many dreamers … And those of us who work in this business have the privilege of shaping how the world perceives this country we love. We are the voice, we are the face of America. Our America is big, it is free and it is open to dreamers of all races, all countries, all religions.”

Also Read: Not My America: The Trump Travel Ban

When the applause died down, he continued. “Our vision of America is directly antithetical to that of President Trump. I want to specifically reject his vision and affirm that America has to be better than that.”

Legend’s remarks were greeted with loud cheers, in stark contrast to the appearance of producer Mark Burnett. When Burnett accepted the Producers Guild Award for the competition show “The Voice,” his speech — which did not mention Trump, who became a media celebrity on Burnett’s show “The Apprentice” — was greeted with tepid applause, along with with a clear smattering of boos from the back of the room.

And those were not isolated instance of politics intruding on the Producers Guild ceremony. The news about the travel ban from seven Muslim countries was the topic of the night inside the Beverly Hilton ballroom, and PGA presidents Lori McCreary and Gary Lucchesi glancingly referred to it in their opening remarks.

Lucchesi pointed out, “freedom of religion was one of the founding principles of our democracy” and McCreary added, “Now, more than ever, we need to remember the words on the Statue of Liberty: ‘Give me your tired, your poor, your huddled masses yearning to break free.”

And two films that are political in very different ways, “Zootopia” and “O.J.: Made in America,” won the award for animated feature and documentary, respectively.

Television winners included two new shows in the main series categories, “Stranger Things” for drama and “Atlanta” for comedy. Other TV winners were “The People v. O.J. Simpson,” “Last Week Tonight With John Oliver,” “Making a Murderer” and “The Voice.”

The Jeff Nichols drama “Loving” was given the Stanley Kramer Award, which goes to a film on social issues.

The Award for Outstanding Digital Series: “Comedians in Cars Getting Coffee” (Season 7, Season 8)