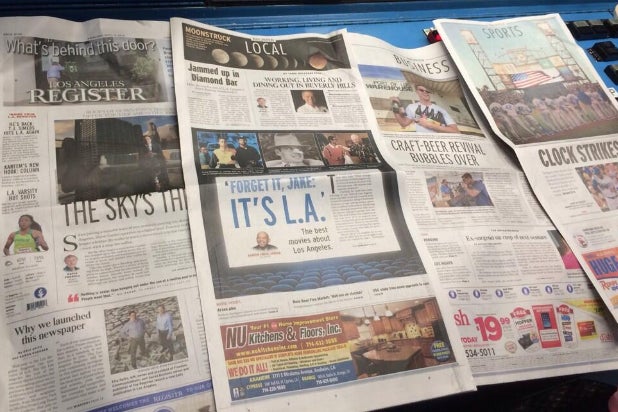 L.A.’s latest metro daily launched Wednesday with a mix of soft-tilting news and business features about the city, along with columns from familiar names such as Kareem Abdul-Jabbar and former L.A. Times sportswriter T.J. Simers.

The Los Angeles Register, the latest newspaper expansion by Orange County-based Freedom Communications, billed itself as the new voice for the sprawling city served by the Los Angeles Times and the L.A. Daily News, among other outlets, in a punishing business climate for print media.

“Welcome to the Los Angeles Register, the new voice of L.A.,” reads a front page story bylined by Freedom owner and President Eric Spitz and publisher Aaron Kushner in the inaugural edition. “Not the Los Angeles the rest of the country thinks it knows, but the astonishing place we experience daily: the tapestry of diverse and distinct communities and neighborhoods, from Monterey Park to Malibu, from Long Beach to La Canada, that join together to make one of the greatest cities on the planet.”

The paper is available at 5,500 retail locations and online at launch, with plans to begin delivery May 1. With a staff of 40, it will run 50 to 60 pages on weekdays with News, Sports, Business, Local and Features/Entertainment sections, and will offer more coverage in the Sunday edition with 80 to 90 pages.

Kushner is betting on a lack of conservative voices in the L.A. newspaper marketplace — he says the Register has a “right of center” viewpoint — but Freedom has its work cut out for itself competing against the dominant Los Angeles Times, struggling with its own financial issues, not to mention the Los Angeles Daily News and five other local dailies.

The initial edition led with soft news: a story about the Ukraine is tucked inside the front page story on L.A.’s rooftop scene, while the front page of the business section touts the craft beer rival in the region.

Online, the home page, led with the craft beer story in the afternoon on a day that Robert Rizzo, the former city administrator of Bell, Calif., was sentenced to 12 years in state prison for corruption.

The expansion may seem perplexing given the tough economics bedeviling the newspaper industry, but Kushner said the paper has an opportunity to thrive.

“Los Angeles is a large and vibrant market,” Kushner told Reuters. “We believe there is a place for our kind of newspaper in Los Angeles.”

Editor Ron Sylvester said the paper will also have a hyper-local focus.

“Local coverage is the heart of what we do at the Register,” Sylvester said in an OC Register story promoting the launch. “We don’t look at Los Angeles as a sprawling metropolis, but as a collection of small communities. We want to tell their untold stories.”

Meanwhile, the Los Angeles Times, the largest paper in the area, has seen hard times of late. The paper has undergone a series of layoffs over the last six months as its parent company, Tribune, prepares to spin off its publishing operations.