Lady Gaga confirmed her involvement with the sequel to Todd Phillips’ “Joker,” this time titled “Joker: Folie à Deux,” with a teaser video released on Twitter (where she has nearly 85 million followers). She will star alongside a returning Joaquin Phoenix.

“Folie à Deux,” which roughly translates to “shared madness” just got a release date of October 4, 2024. Early reports had the pop star playing a new version of Harley Quinn — and Gaga is seen with Harley’s signature heart on her cheek in the teaser video. The version of “Cheek to Cheek” in the video also suggests that reports of the sequel being a musical are true. 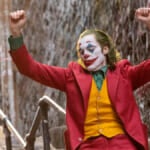 In 2019, “Joker” became one of the most successful comic-book movies, both at the box office and on the awards circuit. After surprising the film world by winning the Golden Lion at the Venice Film Festival, “Joker” became the first R-rated movie ever to gross $1 billion worldwide and earned 12 Oscar nominations, with Joaquin Phoenix winning his first Oscar for his performance as struggling comedian Arthur Fleck, aka The Joker.