Lana Condor will star in “Take Out,” an action comedy series in development at Hulu, an individual with knowledge tells TheWrap.

The 20th Television series follows Iris (played by Condor), a cook with a crime-fighting secret. As if balancing her personal life while working at a restaurant wasn’t hard enough, Iris is determined to destroy an evil crime syndicate that is hell-bent on taking over New York City.

Randall Park and Michael Golamco, who co-wrote the Netflix rom-com film “Always Be My Maybe,” will write the pilot episode of “Take Out.” Park and Golamco will also executive produce the series, alongside Condor and Hieu Ho. 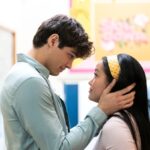 After news of the role broke on Wednesday, Condor tweeted, “IM CRYING !!! LETS GOOOO GET IT!!! The project perfectly combines my favorite things: FOOD, ACTION, and LOVE and I couldn’t be more excited.”

Condor most recently starred in the third installment of Netflix’s “To All the Boys” film series. She is currently filming HBO Max’s sci-fi romantic comedy “Moonshot,” in which she stars opposite Cole Sprouse.

Condor is repped by ICM Partners and Goodman Genow. Park is managed by Artists First and Golamco by Manage-ment. Imminent Collision is repped by UTA and Myman Greenspan.