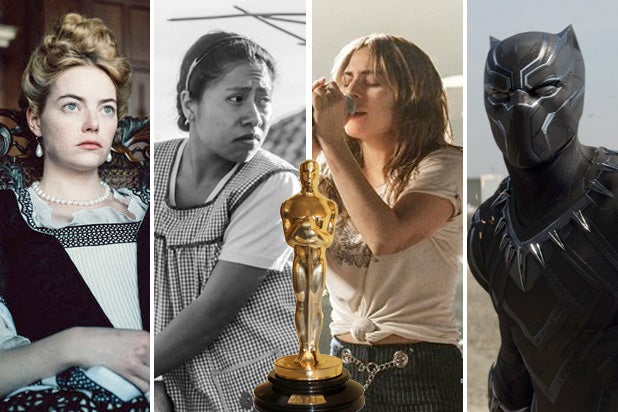 Once you get past all the confusion, all the snafus, all the complaints, this year’s Academy Awards could end up being an historic ceremony.

Here are 35 of the landmarks that could take place on the stage of the Dolby Theatre on Sunday night.

• If “Black Panther” wins Best Picture, it will be the first film in 86 years to win that award without any nominations for directing, acting or screenwriting. The last film to do it was “Grand Hotel,” which won Best Picture in 1932 but did not have a single other nomination.

• If “Black Panther” wins Best Picture, it will also be the first superhero movie and the first Marvel Studios release to do so.

• It would also be the first Disney film ever to win Best Picture, not counting the four wins that Miramax earned when it was a subsidiary of the studio: “The English Patient,” “Shakespeare in Love,” “Chicago” and “No Country for Old Men.”

• If “Roma” wins Best Picture, it will be the first foreign-language film to do so.

• Also the first released by Netflix.

Also Read: Oscar Predictions 2019: Look for 'Roma' and Rami to Triumph in a Close, Close Race

• If “BlacKkKlansman” wins Best Picture, it will be the first Focus Features film to ever win.

• If “Vice” wins Best Picture, it’ll be the first Annapurna release ever to win.

• If “Bohemian Rhapsody” wins, the first for 20th Century Fox since “The French Connection” in 1972.

• If “The Favourite” wins, it would be the fourth win for Fox Searchlight in the last six years, after “12 Years a Slave,” “Birdman” and “The Shape of Water.”

• If Alfonso Cuarón wins Best Director, he will become the first person to do so for a foreign-language film.

• If Cuarón wins Best Director, it will also be the fifth time in six years that the award has gone to one of three Mexican-born directors: Alejandro G. Inarritu, who won for “Birdman” and “The Revenant”; Guillermo del Toro, who won for “The Shape of Water”; and Cuaron, who already won for “Gravity.”

• A victory by Cuarón, Pawel Pawlikowski or Yorgos Lanthimos would also mean that only two of the last 10 Best Director winners have been born in the United States, the most dominant stretch by foreign-born directors in Oscar history. The other foreign-born winners in that time have been Ang Lee (Taiwan), Michel Hazanavicius (France) and Tom Hooper (the U.K.), with only Kathryn Bigelow and Damien Chazelle hailing from the U.S.

• If Cuarón wins Best Cinematography, he will become the first person to win Oscars for both directing and cinematography. One other person, Jack Cardiff, was nominated in both categories for different movies, but did not win in directing.

• If the following people win, they will be the first black people ever to win in their categories:

• If “All My Stars” from “Black Panther” wins for Best Song, SZA will become only the second black woman to win in that category, and the first since Irene Cara won for co-writing the song “Flashdance” in 1984.

• If either Beachler, Carter or SZA wins, she will become the second black woman ever to win an Oscar in a category other than acting. (Cara was the first and only.)

• If “Black Panther” wins for sound mixing, it will be the third win for Willie Burton and will make him the winningest African American in Oscar history.

• If “Shallow” from “A Star Is Born” wins the Oscar for Best Original Song, Bradley Cooper will become the first director to have performed on the original version of an Oscar-winning song from his movie.

• If Glenn Close does not win Best Actress for “The Wife,” she will set a new record for the most nominations without a win for an actress, seven.

• If Regina King wins Best Supporting Actress, she will become only the second actor or actress to win the Oscar after not being nominated by the Screen Actors Guild or BAFTA. Marcia Gay Harden was the first for “Pollock” in 2001.

• If “Roma,” “Cold War” or “Never Look Away” win Best Cinematography, it will be the first foreign-language film to do so since “Pan’s Labyrinth” in 2006, and the fifth overall after that film, “Crouching Tiger, Hidden Dragon,” “Fanny & Alexander” and “Cries and Whispers.”

• If Yalitza Aparicio or Marina de Tavira win Best Actress or Best Supporting Actress for “Roma,” she will become the eighth actor or actress to win for a foreign-language performance. The other eight: Sophia Loren, Robert De Niro, Roberto Benigni, Benicio del Toro, Marion Cotillard, Penélope Cruz and Christoph Waltz. (If you count American Sign Language as a foreign language, you can add Marlee Matlin to the list.)

• If “Incredibles 2” wins Best Animated Feature, Brad Bird will become the category’s winningest filmmaker, with three Oscars. (His first two were for “The Incredibles” and “Ratatouille.”)

• An “Incredbles 2” win will also extend Pixar’s Oscar winning streak to eight consecutive nominations without a loss. The streak began with Bird’s “Ratatouille” in 2007 and included “WALL-E,” “Up,” “Toy Story 3,” “Brave,” “Inside Out” and “Coco.” (During that streak, there were four years when Pixar did not have a nominee — but every year it was nominated, it won.)

• If “Incredibles 2” does not win Best Animated Feature, it will be only the third loss in 12 nominations for Pixar Animation Studios. It will end Pixar’s winning streak at seven.

• If “BlacKkKlansman,” “The Favourite,” “Bohemian Rhapsody,” “Vice” or “A Star Is Born” wins Best Picture, it will be the first film to win without previously winning the Producers Guild Award, Directors Guild Award, Writers Guild Award or Screen Actors Guild ensemble award in the time that those four awards have been handed out, 1995 to now.

• If “Black Panther” wins Best Picture, it will be the first film to win with only an ensemble win from SAG among the four major guilds.

• If “Roma” wins Best Foreign Language Film, it will be the first Mexican film to ever win that award out of 51 submissions and nine nominations.

• If Marc Shaiman wins the Oscar for either the score to “Mary Poppins Returns” or the song “The Place Where Lost Things Go” from that film, he’ll become the 16th person to win the Emmy-Grammy-Oscar-Tony grand slam known as the EGOT, and the fourth to complete the EGOT in the last six months. He will also become the seventh composer/songwriter to win the EGOT.

For the record: A previous version of this story incorrectly said that Bradley Cooper was credited as co-writer on “Shallow,” and would become the second director to win an Oscar for a song from a film he directed.