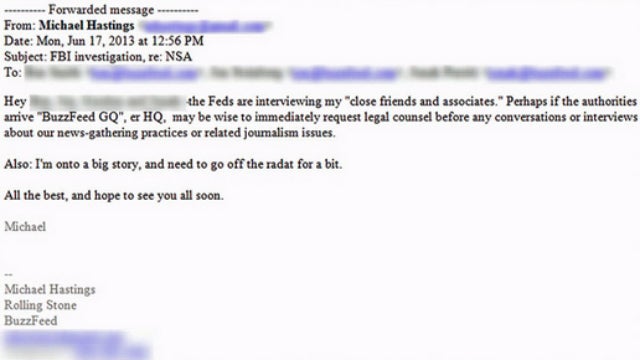 LAPD has officially identified journalist Michael Hastings as the victim who died in Tuesday’s fatal car crash on Highland Avenue in Los Angeles.

A statement released by the police on Saturday said, “the driver of the 2013 Mercedes C250 has been identified as 33-year-old Michael Mahon Hastings.”

The police also said an investigation into the crash was still ongoing by the West Traffic Detectives.

Conspiracy theories have been circulating the Internet about the investigative journalist’s suspicious crash. Though the FBI told TheWrap on Thursday that Hastings was not under investigation, KTLA released an email on Saturday that Hastings sent just 15 hours before he died which suggests otherwise.

Hastings — most famous for a 2010 Rolling Stone article that led to the resignation of Gen. Stanley McChrystal —  is said to have been working on a story about Jill Kelley’s lawsuit against the FBI and the Department of Defense at the time of his death.

Staff Sgt. Joseph Biggs, who had know Hastings since 2008 when the journalist was embedded in Afghanistan, told KTLA that he received an email from Hastings on Monday around 1 p.m.

“On Monday morning, I woke up and I got an email, and it’s very panicked,” Biggs told KTLA.

Here’s what the email — sent to Hastings’ colleagues and which Biggs was blind copied on — said:

Hey _________ – the Feds are interviewing my “close friends and associates.” Perhaps if the authorities arrive “BuzzFeed GQ”, er HQ, may be wise to immediately request legal counsel before any conversations or interviews about our news-gathering practices or related journalism issues.

All the best, and hope to see you all soon.