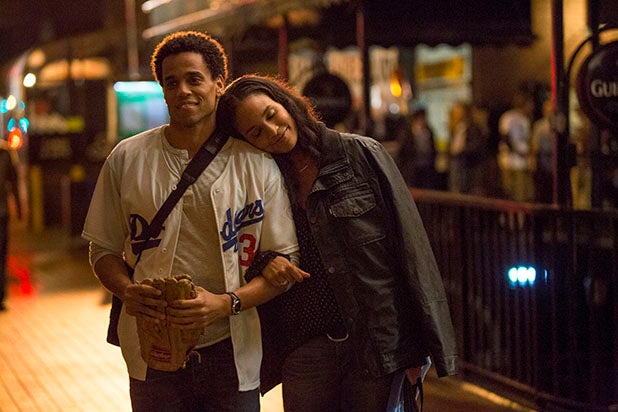 “About Last Night” is a romantic comedy so good that you bristle less at the characters’ problems than at the screenplay’s indulgence of clichés.

An update of Edward Zwick‘s 1986 film of the same name — itself an adaptation of David Mamet‘s play “Sexual Perversity in Chicago” — Steve Pink‘s version (with a script by Leslye Headland, “Bachelorette”) maps a mundane but never boring blueprint for just the sort of middle-of-the-road, healthy but realistically complicated couple that audiences will undoubtedly recognize.

But in the few moments when Pink overreaches into melodrama, he and Headland plumb screenwriting formulas more clearly than they do relationship woes, undermining an otherwise smart and sensitive take on modern romance.

Michael Ealy (“Think Like A Man”) and Joy Bryant (TV’s “Parenthood”) play Danny and Debbie, the best friends of a pair of sex-positive horndogs, Bernie (Kevin Hart) and Joan (Regina Hall), who can’t seem to decide whether they love to hate or hate to love each other. Awkwardly thrown together as referees for Bernie and Joan’s full-contact style of dating, Danny and Debbie share a one-night stand, not expecting it to go any further. But their initial attraction develops into something more, and before long they’re fumbling through the paces of falling in love and moving in together.

Simultaneously, Bernie and Joan go through an acrimonious split, jeopardizing the harmony of the quartet’s social interactions. But even without their buddies testing their loyalty and undermining their confidence, Danny and Debbie begin to succumb to the pressure of a committed relationship, and soon find themselves wondering – together and individually — if they are truly meant to be together.

The worst that can be said about the relationship between Danny and Debbie is that it’s a little bit boring – albeit in the exact way that pairings unlike Bernie and Joan’s typically are. Their evolution from honeymoon-phase exuberance to long-term complacency feels entirely believable, and mostly sympathetic, although they both seem more occupied by the inevitability of their relationship failing than actually just dealing with each problem as it comes and recognizing, quite clearly, that they love one another.

Bernie and Joan, meanwhile, provide both a narrative counterpoint and a welcome alternative to Danny and Debbie’s domestic partnership, showing that the definition of “normal” and “happy” in a relationship is entirely subjective. From their opening duel – a breakdown of their first date (and sex) to their respective buddies – the characters share a similar, go-for-broke passion, and you can actually understand why Danny and Debbie keep them around, both as individuals and a couple: they always make a scene and usually cause trouble, but they’re essentially good people who, just like them, want happiness for themselves and their friends.

In fact, Hart is so good in the role he plays it actually makes up for his turn in “Ride Along,” highlighting his strengths by shaping his manic energy into a character with whom we can identify and about whom we can care. Not unlike Charlie Day, Hart has a dog whistle-sort of comedic style that some love and others loathe; both performers flourish with strong material and direction, and Hart certainly does so here.

As his chicken-mask-wearing lover and occasional adversary, Hall is equal to the challenge of making Joan’s attraction to Bernie reciprocal, and further, her personality complementary to his as well. After four “Scary Movie” installments and “Superhero Movie,” she’s more than paid her dues as a comic performer, and Hall makes the most of a meaty, interesting character who dives headfirst into the kind of crazy that’s both overwhelming and oddly irresistible.

Meanwhile, Ealy and Bryant are solid as the “serious” lovers to whom all of the meat-and-potatoes relationship problems occur. But when Headland’s screenplay veers into, well, movie territory — such as when Danny “chivalrously” brings home his troublesome ex (Paula Patton) to sleep off her drunkenness on the one night when Debbie is out of town — the performers seem slightly lost, as if in shock that the film temporarily abandoned its intelligence and subtlety in favor of the sort of boringly obvious rom-com conflict that hack screenwriters concoct when their story stalls.

Nearly perfectly balancing the humdrum normalcy of Danny and Debbie and the comic volatility of Bernie and Joan, Pink’s film really feels like a grown-up movie that hits all the bases — funny enough to keep things interesting,  yet serious enough to keep them compelling. Not to sound like a blurb-generator, but “About Last Night” makes for a pretty terrific date movie, whether it’s your first with a new special someone or the first in months for you and your long-term partner, because it demands only a commitment to be entertained, but still manages to make you consider what it means to be in a relationship.